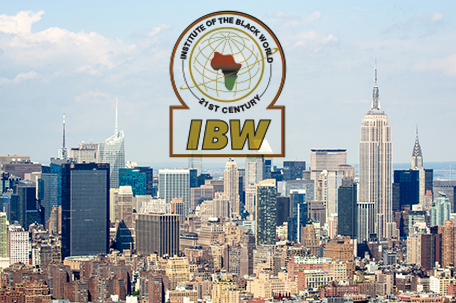 New York–The Institute of the Black World 21st Century (IBW), a leading research, policy and advocacy group with offices in New York and Baltimore, announced today that it is holding an International Reparations Summit at various sites across New York City, from April 9 to 12, 2015.

Speakers at the conference include Prof. Sir Hilary Beckles, Vice-Chancellor of the University of the West Indies and chair of the Caribbean Community’s (CARICOM) Reparations Commission; civil rights leader the Rev. Jesse Jackson, Prof. Charles Ogeltree of Harvard University and Mireille Fanon Mendes France, President of the Frantz Fanon Foundation and Chair of the UN Working Group of Experts on People of African descent and daughter of Frantz Fanon, the Black liberation theoretician and psychiatrist from Martinique.

During the Summit, U.S. Rep. John Conyers Jr. (D-Mich.), the most senior member of Congress and the dean of the Congressional Black Caucus, will be honored for authoring HR 40, the “Commission to Study Reparation Proposals for African Americans Act” and for his 50 years of service on Capitol Hill.

“We are delighted that the Institute of the Black World can be a clearinghouse for ideas and strategies on how to pursue reparations for historical crimes and injustices against people of African descent in the US and across the Americas,” said Ron Daniels, the Institute’s President. “The courageous decision by nations in the Caribbean to demand reparations from the former European colonialists for Native Genocide and African enslavement and the formation of a CARICOM Reparations Commission is re-energizing the Reparations Movement in the U.S. and throughout the Pan African world.”

“The main purpose of the International Summit is to advance the public discussion and debate around reparations issues and to provide a platform for advocates from around the world to dialogue, learn from each other, strategize collectively, support and reinforce each other’s campaigns, build bridges across geographical and linguistic barriers and co-ordinate action plans,” said Don Rojas, IBW’s director of communications. “The international nature of this summit is unprecedented in the long (and all too often ignored and marginalized) history of the reparations movement in the Americas.”

The conference begins at the historic Mother AME Zion Church in Harlem, the oldest black church in New York State and a center for the Underground Railroad back in the 19th Century. The business sessions will be held at York College in Queens and the summit will conclude with a public rally at the First AME Zion Church in Central Brooklyn, home to the largest Caribbean community in the United States.

One of the highlights at the closing rally will be inspirational music sung by a newly formed ‘Reparations Choir’, composed of members from several black churches in Brooklyn.