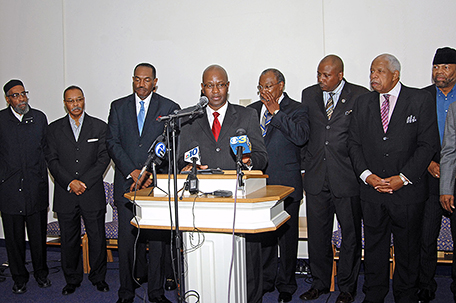 ABOVE PHOTO:  Rev. Terrance Griffith, (at podium) Pres. of Philadelphia Black Clergy & Vicinity is surrounded by Phila. NAACP President Min. Rodney Muhammad (fourth from left) and members of  Phila. NAACP and Phila. Community of Leaders, speaks about the latest in terroristic threats to the Islamic community.  (Photo by Bill Z. Foster)

In a show of solidarity, the Reverend Terrance Griffith, President of the Philadelphia Black Clergy & Vicinity; Rahim Islam, Convener of the Philadelphia Community of Leaders; Minister Rodney Muhammad, President of the Philadelphia Chapter of the NAACP and elected officials held a press conference Thursday at Triumph Baptist Church, 1648 W Hunting Park Avenue to address and denounce terrorism of any kind, including racist and polarizing statements crafted by the media that connects Islam and terrorism and the recent statements made by Republican Presidential Candidate of United States of America – Donald Trump and the barring of Muslims into our country.

Griffith states, “Terror is terror and any acts of violence committed by criminals in the name of religion is terror.” Islam states “as Black people in America we are keenly aware of acts of terror and statements of hate aimed against the Black community and we wholeheartedly reject. We deplore all types of terrorism even violence perpetuated in the name of religion, policing, and poverty.”

Reverend Griffith has called on leaders of all religions and civic groups in the Delaware Valley to stand with us against the bigotry and extremist violence being conducted in the name of religion by criminal opportunists. Islam adds, “Dr. King once said, injustice anywhere is a threat to justice everywhere and these attacks have malicious intent against innocent people.”

The coalition plans to meet on a regular basis to develop an agenda for the Black community, which we will insert into this political season.