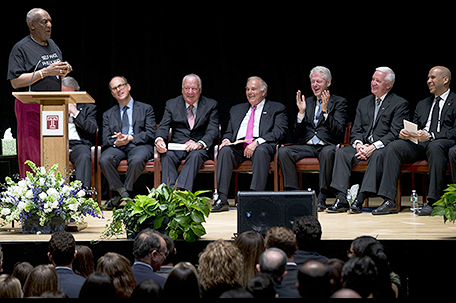 Lewis Katz was a serious businessman and philanthropist. He also was mischievous and full of boyish wonder.

Politicians, athletes and others remembered both sides of the Philadelphia newspaper co-owner at a three-hour memorial service Wednesday.

The 72-year-old Katz and six others died Saturday when Katz’s private plane crashed as it attempted to take off near Boston. The cause remains under investigation.

Days earlier, the sports team owner-turned-philanthropist had won an $88 million bidding war for the company that operates The Philadelphia Inquirer and Philadelphia Daily News.

Mourners at the memorial reflected the broad range of Katz’s high-profile life.

Raised by his widowed mother in working-class Camden, New Jersey, Katz rose to become a co-owner of the New Jersey Nets and New Jersey Devils. He made his fortune in parking lots, billboards and a sports cable TV network in New York. He gave away millions, including $25 million to Temple University, which had given him a scholarship to attend college, and $15 million to Penn State’s Dickinson School of Law, where he graduated first in his class.

Along the way, he took his New York coffee shop cashier to the Super Bowl, hosted Boca Raton waiters on gambling trips to the Bahamas, and treated high school friends on annual retreats.

“He never forgot people who started, as he did, with nothing,” Clinton said. “It bothered him that anybody with any dream would be left out or left behind.”

Clinton recalled being at an event when tennis star Andre Agassi described the success of the school he opened in a low-income neighborhood in Las Vegas. Katz shouted out a pledge to open a similar school in Camden and to fund it himself.

It took five years, but the Katz Academy ultimately got off the ground, and now has two schools.

“If more of us acted on our better impulses, and then kept our commitments … it’d be a better world today,” Clinton said.

Katz Academy board director Marcella Dalsey also died on the plane, which was returning to New Jersey from the home of historian Doris Kearns Goodwin.

Rendell spoke of Katz’s mischievous, impulsive nature, which once led him to redirect his plane to South Dakota, so guests aboard could see Mount Rushmore.

“If you were a friend of Lewis Katz, you used the term, ‘He did what?’ an awful lot,” Rendell said. “The world will never be as much fun as it was Saturday afternoon.”

Rendell had been invited on the trip to Boston but had to decline. The others killed included two other friends, two pilots and the cabin attendant.

National Transportation Safety Board investigators say data from the flight recorder show the plane reached minimum takeoff speed but never lifted off the ground before it plunged into a ravine and burst into flames. The data also suggest the crew tried to slow or stop the doomed aircraft.

A private funeral for Katz was held Tuesday.

Katz, in his final hours Saturday, had asked to visit Sleepy Hollow Cemetery in Concord, Massachusetts, where authors Nathaniel Hawthorne, Henry David Thoreau and Ralph Waldo Emerson are buried. In his pocket, he carried a book by the Roman philosopher Seneca about the shortness of life.

“Lewis was in terrific spirits that sunny afternoon,” said Goodwin, who said Katz was excited about the newspaper venture. “He told me he felt like a young boy again. … All his life, he retained the best qualities of being a little boy — above all, a sense of the wonder of life.”