In year of Democratic hopes, GOP comes out on top in Florida 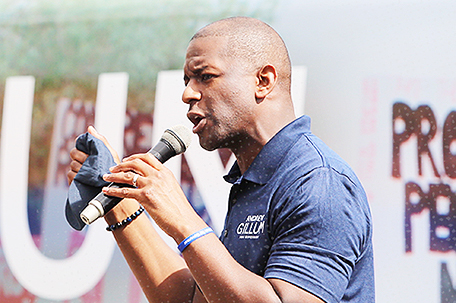 TALLAHASSEE, Fla.  — This was the year Florida’s Democrats spoke ambitiously of ending their 20-year journey in political exile in this battleground state. Instead, election results after a tense and bruising recount showed Republicans coming out on top for governor and even picking up a U.S. Senate seat.

After a recount dragged on for nearly two weeks, top Democratic candidates in the state came agonizingly close but fell short of their avowed goal.

Democratic candidate for governor Andrew Gillum conceded Saturday, followed by three-term incumbent U.S. Sen. Bill Nelson a day later. More than 8 million voters weighed in — a far higher turnout than in past midterm elections — but the result was the same for Democrats.

The close of nearly two weeks of high political drama in the presidential swing state likely spelled the end of the political career of the 76-year-old Nelson. First elected to Congress 40 years ago, Nelson had been a Democratic survivor in an era when Republicans swept to power in Florida in the ’90s. He was first elected to the U.S. Senate in 2000 and was seeking a fourth term.

“It has been a rewarding journey as well as a very humbling experience,” Nelson said in a videotaped statement . “I was not victorious in this race but I still wish to strongly reaffirm the cause for which we fought: A public office is a public trust.”

The political journey, however, appears to still be unfolding for Gillum, who ran on a liberal platform that included expanding Medicaid and raising taxes to spend more on education — both potential hard sells in the GOP-controlled Legislature.

In his concession video , Gillum told supporters to “stay tuned” about his next move.

“Although nobody wanted to be governor more than me, this was not just about an election cycle,” said the 39-year-old Tallahassee mayor. “This was about creating the type of change in this state that really allows for the voices of everyday people to show up again in our government, in our state, and in our communities. We know that this fight continues.”

In an interview on Fox & Friends on Monday morning, DeSantis called Gillum “a very formidable opponent.”

“He was the only one that inspired anybody with enthusiasm. … He was really responsible for driving a lot of these Democrats to vote who don’t normally vote in midterm elections. So … it was a tough fight.”

Now, ahead of the 2020 presidential election, it will be Republicans again in firm control in Florida. A Scott victory means Florida will now have two Republican senators while padding the chamber’s Republican majority.

Nelson, a Florida native with a distinct twang, fought a hard and acrimonious race against Scott, a multimillionaire businessman and relative newcomer who jumped into politics eight years ago and was urged to run this time by President Donald Trump.

And it was the third time Scott barely edged out a Democratic opponent.

“Now the campaign truly is behind us, and that’s where we need to leave it,” Scott said in a statement after official results were posted. “We must do what Americans have always done: come together for the good of our state and our country. My focus will not be on looking backward, but on doing exactly what I ran on: making Washington work.”

Scott, who was also interviewed by Fox & Friends on Monday morning, said Nelson was “gracious” when he called him on Sunday to congratulate him.

“I told him if he has any ideas of how to do my job better, don’t hesitate to call me,” Scott said. “I represent everybody in my state.”

Trump congratulated Scott on Twitter: “From day one Rick Scott never wavered. He was a great Governor and will be even a greater Senator in representing the People of Florida. Congratulations to Rick on having waged such a courageous and successful campaign!”

While Scott and Nelson disagreed on such key issues as gun control, health care and the environment, their campaign focused primarily on attacking each other’s character and competence.

Scott bashed his rival as ineffective and out-of-touch in TV ads paid for by more than $60 million of the Republican’s own money.

Nelson branded Scott as a Trump follower who used the governor’s office to pad his wealth.

Nelson and his allies also ran ads that questioned Scott’s ethics, pointing to his ouster years ago as chief executive of health care giant Columbia/HCA amid a federal fraud investigation. Scott was never charged with any wrongdoing, though the health care conglomerate paid a then-record $1.7 billion fine for Medicare fraud.

Nelson was seen as a moderate who rarely made waves or earned much national exposure as he largely devoted himself to Florida-specific issues. One of his more notable moments came when he flew on Space Shuttle Columbia while serving in Congress.

His only other election loss came in 1990 in a Democratic primary for governor — to the eventual winner Lawton Chiles.

After it became clear the Senate race would head to a legally required recount, Nelson and Democrats filed several lawsuits that challenged everything from Scott’s authority over the state’s election division to deadlines for mail-in ballots.

Republicans also raised questions about how some South Florida election officials were counting the ballots.

The South Florida Sun-Sentinel reported late Sunday that one of those officials, Broward County Supervisor of Elections Brenda Snipes, had presented a resignation letter to step down in January. The report cited an attorney who works as counsel to the Broward elections office, Burnadette Norris-Weeks. Snipes couldn’t immediately be reached for comment.