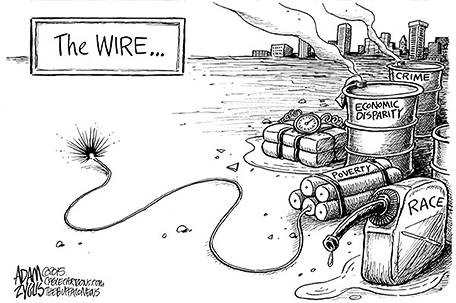 BALTIMORE — Baltimore Mayor Stephanie Rawlings-Blake climbed onto the deck of an abandoned row house in Tuesday’s sweltering summer heat and promised that “better is coming” as she promoted the restoration of a blighted block not far from where riots broke out earlier this year.

In another year or so, the three-story brick shell of a building, one of nine vacant houses on the block in Reservoir Hill, should be ready for new tenants, thanks to a $4.6 million rehabilitation initiative. The neighborhood also is getting a new public school, part of the city’s $1 billion school construction program.

For better or worse, since she sacked Police Commissioner Anthony Batts, the mayor has been alone at the top of a city government that has yet to show how it will repair the strained relationship between police and the people of inner-city Baltimore.

But for many in Baltimore, the memory of how Rawlings-Blake responded to the riots is too raw, and the city’s unmet expectations are overwhelming. There are 17,000 vacant homes in Baltimore, concentrated in the same neglected neighborhoods where the death of Freddie Gray in police custody prompted a wave of arson, looting and open confrontations with riot police in April.

Rawlings-Blake now runs a city that is still reeling from the $30.4 million economic cost of looting and arson in April and the citywide curfew that followed, but also, for the first time in decades, openly acknowledging the longstanding and deep-seated problems that seeded it all — dismal housing, nonexistent jobs, poor education and racial inequality.

Chanta Saunders, 25, was friends with Gray, who died a week after breaking his neck while he was bounced around in the back of a police van. She said the mayor’s decision to fire Batts was good, but that Rawlings-Blake was just as much at fault for problems with policing.

“He should have been fired,” Saunders said. “He needed to be fired, but so does the mayor.”

At a July 9 news conference, Rawlings-Blake said Batts had become too divisive and distracting since six officers were arrested on charges ranging up to second-degree murder in Gray’s death. The charges helped end days of tension in the streets, but Batts failed to reverse plummeting arrests and skyrocketing murders since then.

“The people of Baltimore deserve better and we’re going to get better,” she said then.

But Rawlings-Blake has also faced criticism. Some blame the citywide curfew she authorized, which led to hundreds of arrests on charges that were nearly all dropped. The curfew was strictly enforced in poor neighborhoods, but hardly honored in wealthier neighborhoods in the majority black city.

Most of all, the mayor was blamed for failing to show up as the crisis unraveled. For nearly five hours, as windows were smashed and buildings set aflame across swaths of east and west Baltimore, she was nowhere to be seen. The next day, Maryland Gov. Larry Hogan said Rawlings-Blake did not return his calls for hours as he was seeking guidance on whether to call in the National Guard.

“The city needed to hear about action, not the hours she spent behind the scenes, dealing with the ‘T’s to be crossed and I’s to be dotted’ to make sure the executive order mandating an evening curfew was just right,” its editorial read. “Baltimore has already suffered incalculable damage in terms of destroyed property, injured police officers and civilians, and the tarnished image of the city in the eyes of those who live here, in the suburbs and around the world. Repairing that damage is going to require real leadership. So far, we’re not seeing it.”

Since then, Rawlings-Blake has tried to focus attention on her efforts to restore vacant housing, build new schools and reopen recreation centers for the city’s youth.

“People want Baltimore to heal, they want to be part of the process and we’re taking that,” the mayor said, describing how she’s trying to channel investment and “community spirit” into real, bricks-and-mortar improvements.

Democratic U.S. Rep. Elijah Cummings, who lives in West Baltimore, said Rawlings-Blake has not received the credit she deserves for keeping the peace during times of tumult in Baltimore.

“There was a lot of back and forth between her and the governor, and I think whenever you have two entities of government — state and local — and you’ve got people of different parties heading those agencies, you’re probably going to run into disagreements,” Cummings said. “But the fact is, you have to look at the bottom line. No shots fired. Think about that. No shots fired. When I was out on that street I knew: if one shot had been fired, the whole city would have blown up. It was just that tense.”

Saunders, who lives in the same public housing project where Gray was arrested, said she has never voted but plans to register just to choose former Mayor Sheila Dixon next year to replace Rawlings-Blake.

Dixon, who was mayor from 2007 until she resigned in 2010 as part of a plea agreement stemming from charges that she stole gift cards meant for poor children, announced her candidacy this month. She remains popular despite the scandal. At Gray’s funeral, Rawlings-Blake received polite applause, while Dixon was greeted with a standing ovation from the crowd of more than 2,500 people.

Now, more than ever, Dixon said in an interview, Baltimore needs direction.