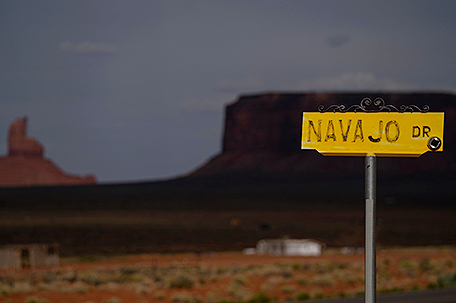 ABOVE PHOTO: A sign for Navajo Drive is seen against a cloud-darkened Sentinel Mesa in Oljato-Monument Valley, Utah on the Navajo Reservation on April 30, 2020. (AP Photo/Carolyn Kaster)

By Felicia Fonseca And Tim Sullivan

TUBA CITY, Arizona  — The virus arrived on the reservation in early March, carried in from Tucson, doctors say, by a man who had been to a basketball tournament and then made the long drive back to a small town in the Navajo highlands.

There, believers were preparing to gather in a small, metal-walled church with a battered white bell and crucifixes on the window.

From that church in Chilchinbeto, COVID-19 took hold on the Navajo Nation, hopscotching across families and clans and churches and towns, and leaving the reservation with some of the highest infection rates in the U.S.

Crowding, tradition, and medical disparities have tangled together on the tribe’s land — an area nearly three times the size of Massachusetts — creating a virological catastrophe.

And the most basic measures to fight the virus’ spread — handwashing and isolation — can be difficult.

One-third of the homes across the vast, dry reservation don’t have running water, forcing families to haul it in. Many in close-knit Navajo communities live in crowded houses where self-quarantine is impossible, and many must drive hours to the nearest grocery store. To most Navajo, isolating an infected person from their family is deeply alien.

With roughly 175,000 people on the reservation, which straddles Arizona, New Mexico and a small corner of Utah, the Navajo Nation has seen 3,122 cases – a rate of nearly 18 cases per 1,000 people. At least 100 people have died.

If Navajo Nation were its own state, it would have the highest per-capita rate of confirmed positive coronavirus cases in the country, behind only New York. In the states it spans, the number of cases and deaths among people who are Native American, on and off the reservations, is disproportionately high.

On the Navajo Nation, there was the beloved 42-year-old high school basketball coach who left behind five children. There was the carpenter who lived with his brother and died on Easter morning at age 34. There was the 28-year-old mother who competed in Native American pageants.

And on the far western side of the reservation, there’s the extended Dinehdeal family who live in a cluster of prefabricated and mobile homes in Tuba City. The family has lost four members to the virus.

It began in late March with Maryann Welch, age 82. Her nephew and her 71-year-old sister, Eva Dinehdeal, drove the 90 miles from Tuba City to Maryann’s home to take her to the hospital. Soon Eva was sick, too. Then it was Maryann’s son, Larry, a veteran of the Army’s 82nd Airborne Division. He and his mother died a day apart.

Dinehdeal’s daughter, Gloria Uriarte, 45, had moved back to Tuba City from outside Phoenix with her 6-year-old son, Curly, thinking they’d be safer. But she, too, became ill, and died on April 11, the same day as Eva.

Angelina Dinehdeal, one of Eva’s daughters-in-law, is trying to hold the family together. Grief and exhaustion weigh heavily on her.

“It just seems like every time I take someone in (to the hospital) they never come out,” she said.

In Navajo tradition, communities gather for four days of mourning before a burial. Sacred stories are told. Elders talk to the young about coping with death. In a culture where dying is rarely spoken about, it is a chance to openly grieve.

But with families hunkered down to avoid the spread of the virus, burials have become rushed graveside services. Some families have sidestepped tradition and had their relatives cremated.

“You can’t even go see your mom and dad. You can’t see your relatives to find that comfort,” said Cheryl Blie, a Navajo who lost a cousin to the virus. “And the grief – the grief is so unbearable.”

The virus hit like a tsunami in mid-March, and smaller medical centers quickly were overwhelmed. Health problems that make COVID-19 more deadly, such as obesity, diabetes and heart disease, are all much more common among Native Americans than the general U.S. population.

A cobbled-together coalition of caregivers— doctors from the federal Indian Health Service and local hospitals, Navajo Nation officials, the National Guard, community health nurses, volunteer doctors, nurses and EMTs from across the country — has rallied as the number of cases grow.

The doctors are exhausted, the hospitals don’t have enough staff, and the protective gear is carefully rationed. Three isolation centers were set up in basketball gyms. The sickest patients are flown to larger hospitals off the reservation.

If the Navajo are susceptible to the virus’ spread in part because they are so closely knit, that’s also how many believe they will beat it.

They’re leaving boxes of food and supplies on the steps of elders’ homes or in grocery bags hanging from fence posts. They’re driving for hours to take relatives to hospitals. They’re delivering water to friends and family.

Raynelle Hoskie recently was hauling water for her six children and her in-laws who live next door in a small traditional Navajo home, or hogan. For her, that togetherness is a sign of tradition and strength.