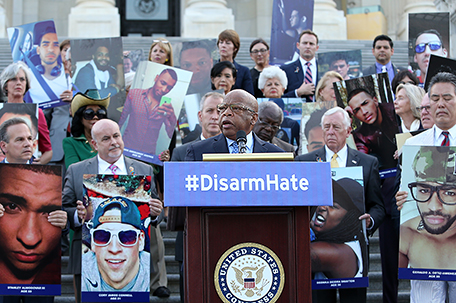 ABOVE PHOTO:  Rep. John Lewis (GA-05), center, speaks at an event on the steps of the U.S. Capitol Building for an evening of remembrance honoring the victims and survivors of the mass shooting that took place at Pulse nightclub in Orlando one month ago on Tuesday, July 12, 2016 in Washington, DC. (Paul Morigi/AP Images for Human Rights Campaign)

By Mike Schneider and Terrance Harris

ORLANDO, Fla. — At 2:02 AM Monday, the names of 49 people killed in the worst mass shooting in modern U.S. history were read out loud outside the Pulse nightclub, marking the exact time a year ago when a gunman started firing during “Latin Night” at the gay club.

“I realize that gathering here in this place, at this hour, is beyond difficult,” Orlando Mayor Buddy Dyer told survivors, victims’ families, club employees and local officials during the private service. “But I also know that the strength you’ve shown over the past year will carry you through today and in the future.”

The service began what would be almost 24 hours of observations to remember the victims and the dozens of Pulse patrons who were wounded when Omar Mateen opened fire and pledged allegiance to the Islamic State. He was eventually killed by police after a three-hour standoff on June 12, 2016.

Later Monday morning, hundreds of people dropped off flowers, drawings and cards at a memorial near Pulse. Another midday service was held, followed by an evening gathering in the heart of downtown Orlando and a final, music-filled late-night service at the nightclub.

Jeannine Williams used to live within walking distance of Pulse and was a frequent visitor. She had made plans to be there the night of the shooting but decided to go another night club.

“A year later I think the thing that is most important is this community and why I live here and why I’m so happy to live here,” Williams said through tears. “The support we not only have from our city government, it’s not fleeting support, it’s not support on certain days. It’s the way the community is. This is Orlando. This is why I just love living here.”

At noon, church bells throughout the Orlando area were set to ring 49 times. Gov. Rick Scott ordered U.S. flags around Florida to be flown at half-staff and a giant rainbow flag would be unveiled at the Orange County government building.

Monday’s services culminated several days of events aimed at turning the grim anniversary into something positive. A foot race was held over the weekend, and eight gay and lesbian students were awarded $4,900 toward their college studies by a local businessman. Local officials have declared the one-year mark as a day of “love and kindness,” and they are encouraging residents to volunteer or perform acts of compassion.

An exhibit of artwork collected from memorial sites set up around Orlando after the massacre will be shown at the Orange County History Center. The club’s owner, Barbara Poma, is developing plans to build a memorial at the Pulse site.

Mateen’s wife, Noor Salman, is facing charges of aiding and abetting and obstruction in federal court. She has pleaded not guilty to helping her husband.