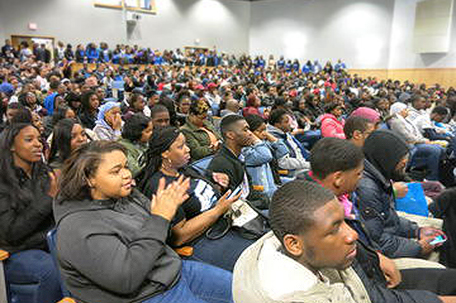 ABOVE PHOTO:  More than 600 prospective students flocked to Cheyney University’s Spring Open House on March 24th to see what the nation’s first HBCU has to offer. Nearly a third of them left with acceptance letters.

CHEYNEY, PA – More than 600 prospective students traveled to Cheyney University of Pennsylvania’s beautiful suburban campus on March 24th for Spring Open House. Buses brought students from New York, Washington, DC, and Philadelphia. Students also flew in from Texas and North Carolina, while others came by car from all around Pennsylvania, Delaware, Maryland, Virginia, and other states.

By 10 am, when the open house program was scheduled to begin, it was standing room only.  The Cheyney chapter of Alpha Phi Alpha Fraternity kicked off the event with a lively step show, followed by remarks from Interim President Dr. Frank G. Pogue. Out of the 11 institutions that he has led, this was the best open house he’d ever experienced, he said later.

“This is just the best indication ever that Cheyney University attracts students who want to come here,” he said. “Simply put, today was a wonderful and rewarding day for the university. Students and families continue to support this historic institution.”

In addition to the Alphas, Greek Life was showcased by representatives of Omega Psi Phi, Zeta Phi Beta, Iota Phi Theta, Phi Beta Sigma, and Kappa Alpha Psi who took to the stage to show their steps. The cheerleaders and drum corps also performed. Quiyiim Saunders — a senior leader who was honored at the university’s Founder’s Day Convocation earlier this month with the Heart of the Wolf Award — served as emcee, and encouraged the students to make Cheyney their home for the next four years. Dr. Robert M. Dixon, Provost and Vice President for Academic Affairs, talked about the university’s academic offerings and interacted with the crowd, getting them to chime in on a rap-style poem about supporting Cheyney for life.

“I’m so happy to be helping students find their way to college,” she said, smiling broadly. “That’s where I found my calling and that’s where I think they can find their calling.”

Inside the Ada Georges Dining Hall, students got to taste campus cafeteria food and check out the Academic and Activity Fair in the ballroom. Faculty, coaches, student leaders and staff hosted informational tables detailing all that Cheyney has to offer. Financial Aid and Admissions personnel had lines of students waiting to get their transcripts and SAT or ACT scores scrutinized so that they could get admitted on the spot and start the process of getting financial help to pay their bills.

Tarique Martin, a senior at Academy Park High School in Sharon Hill, Pennsylvania, applied to a number of Predominantly White Institutions (PWIs) and one Historically Black College and University (HBCU), Cheyney. It didn’t take long for him to learn that he passed Cheyney’s criteria and he was officially accepted. The certificate, admission letter and packet he was handed confirmed it.

“I’m fairly certain that I’ve found my home for the next four years,” he said. “I’ve been on a lot of campus tours but I never got the feeling that I have today. I feel so connected. This is a very welcoming environment. Everyone is tight-knit and everyone knows each other. It just feels like the right fit.” He plans to major in Biology and become a Sports Medicine Doctor one day.

Stacey Goodman couldn’t stop crying after her daughter, Ayana, got her admission certificate and packet.

“I am so happy for her and so proud of her. I didn’t make it to college, but I’m so happy that she did and she chose Cheyney.”

“I’m speechless and excited,” her daughter exclaimed with a big sigh of relief. “My sister went to Cheyney and she loved it. I plan to major in Education here.”

Jim McKelvey ’82, President of the Philadelphia Cheyney University Alumni Chapter, wasted no time presenting her with scholarship information, telling her that, if she meets the criteria and keeps her grades up, she’ll have financial help all four years she’s enrolled at Cheyney.

“We want to support the students who are accepted at Cheyney and let the parents know that we’ve got your back. We’re going to support your child all four years as long as they meet the criteria.”

Cheyney alumni, passionate about their alma mater, spent weeks calling prospective students to remind them about what they were missing from their application and to encourage them to come to the Spring Open House.

Tia Parks, Interim Director of Admissions, is thankful for their support and was more than pleased with the turnout.

“I’ve never seen the auditorium packed for Open House with people standing three, four and five people deep along the walls because there weren’t enough seats,” she said. “It just shows that there is just as much need for Cheyney University today, as it was when the school was founded in 1837.”

Jalen Sallie only applied to HBCUs. The Trenton, New Jersey native said he applied to Cheyney because all of the Cheyney alumni that he knows rant and rave about Cheyney.

“Now, I can see why,” he said with a grin after getting his acceptance certificate and packet. He plans to major in Sociology at Cheyney and, hopefully, play football for the Wolves.

Shamora Jones got lost seven times on her drive from Queens to Cheyney. She, too, wanted to go to a HBCU and did a lot of research before she zeroed in on the school. The non-traditional student owns her own business managing Soca artists who produce Caribbean-type music. She plans to move to Pennsylvania while attending Cheyney, major in Fine Arts and minor in Music.

Kristy Matlock, from Elkins Park, Pennsylvania already has her Associates Degree from Montgomery County Community College. She plans to transfer to Cheyney and major in Liberal Studies. “I’m very excited that Cheyney offers Liberal Studies,” she said, “and that the classes are offered” at Cheyney’s Center City Philadelphia location at 701 E. Market Street, just steps from a variety of public transportation.

Faculty members, pleased with the turnout, reported that students were very engaged and excited as they stopped to chat at the many tables in the ballroom, taking brochures, pamphlets and other information with them. While Cheyney is the nation’s first HBCU, diversity was clearly evident at Open House as Caucasians, Hispanics, Asians and African Americans made up the crowd.

Of the more than 600 students who attended Friday’s Open House, 163 of them left with acceptance letters.

With a new branding and message, Cheyney is moving forward in every way—with forward-thinking faculty, students who put their best foot forward, alumni who pay it forward and incoming students who are looking forward to continuing their education at a school with a rich legacy and commitment to grooming the next generation.

A liberal arts university, Cheyney University of Pennsylvania hosts signature programs such as the Keystone Honors Academy, the Aquaculture Research and Education Laboratory, and the accredited Hotel, Restaurant, and Tourism Management program.  Recognized as the nation’s first HBCU, Cheyney University has been educating students since 1837.  The University offers baccalaureate and graduate degree programs at two locations, Cheyney and Center City Philadelphia.  For more information, please visit the website at www.cheyney.edu.

Fight for Justice at Cheyney University beats the odds