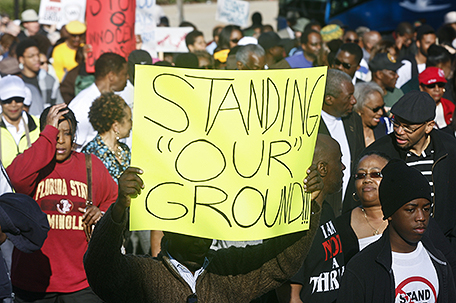 ABOVE PHOTO:  Marchers hold up their signs as they walk to the Florida Capitol Monday, March 10, 2014, for a rally in Tallahassee, Fla. Participants were rallying against the state’s “Stand Your Ground” laws.  (AP Photo/Phil Sears)

TALLAHASSEE, Fla. — The Rev. Al Sharpton led hundreds of people on a march Monday to the state Capitol, where they rallied against Florida’s “stand your ground” law.

Among those present were the parents of slain black teenager Trayvon Martin and the family of Marissa Alexander, who was sentenced to 20 years for firing a gun near her estranged husband.

The crowd rallied on the Capitol steps across from Florida’s Supreme Court.

“To have laws that tell people that they can shoot first and then ask questions later is a violation of our civil rights. I believe that law is inherently wrong,” Sharpton said before the march began. “The law in effect says based on your imagination — if you imagine I’m a threat — you have the right to kill me.”

Sharpton called Florida “ground zero” for the fight against ‘stand your ground.’

Protesters waved signs saying “STANDING OUR GROUND” and wore T-shirts reading, “We are not a threat.” Images of Martin were pictured on signs, shirts and drawings. Sharpton’s National Action Network joined other groups in backing the rally.

Florida law says people who are not involved in illegal activity have the right to stand their ground and meet force with force, including deadly force, if they reasonably believe it’s necessary to avoid death or great bodily harm.

Those present said reforms are needed.

“Everybody trying to stand in solidarity and show that these laws that don’t apply to us, we’re here to change them,” said Tracy Martin, Trayvon’s father, speaking with The Associated Press.

“What the law is actually saying is this country doesn’t value the life of black and brown kids. We want our kids to understand their lives are equal value of anybody else life,” the elder Martin said. 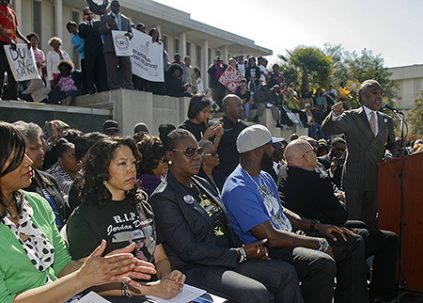 Florida’s Republican-dominated Legislature has declined calls for substantial changes to the stand your ground law enacted in 2005. Democrats have filed bills to repeal the law or amend it in recent years.

“I’ve never seen a perfect bill and changes need to happen with this bill,” Brown told AP afterward. “When they started, it had good intentions. Protect your castle. But they have extended it to, you don’t like the color of my dress and you feel threatened after you start a fight — there’s something wrong with that.”

Last summer, members of a group calling itself the Dream Defenders held a monthlong sit-in at the state Capitol urging lawmakers to call a special session to overhaul the law. But Gov. Rick Scott and legislative leaders declined.

Others at Monday’s rally included the family of Oscar Grant, a 22-year-old fatally shot by a police officer while handcuffed in a train station, and the family of Michael Giles, a U.S. Airman sentenced to 25 years in a self-defense case.

Phyllis Giles couldn’t hold back tears as she addressed committee members about her imprisoned son, Michael. She urged the lawmakers to reform the law.

Others issued similar calls, including the mother of Jordan Davis, a black teen from Georgia who was fatally shot outside a Jacksonville store in 2012 after an argument with a man over loud music coming from an SUV occupied by Davis and three friends.

“Stand your ground has become the ultimate loophole for the senseless use of guns,” said Lucia McBath, Davis’ mother. “This law has become the excuse of convenience for people who fire a weapon recklessly.

The National Organization for Women and the National Bar Association sent representatives.

Orlando native Stephen Green, 21, a student at the historically black Morehouse College in Atlanta, took part in Monday’s rally. He said many of his generation were concerned and would pressure for change, especially via social media.

“I’m amazed to see how many people came out on a Monday and sacrificed work, sacrificed school to come out. It really shows how committed the people are to this issue,” he told AP.

Kill at will: Stand Your Ground laws contribute to 600 additional homicides a year