Hundreds of Nigerian students missing after attack on school 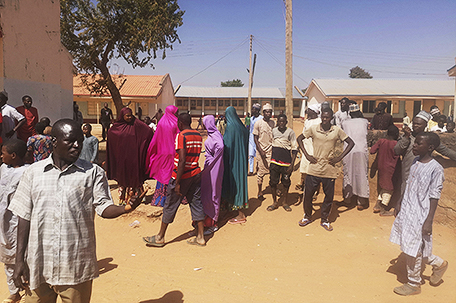 ABOVE PHOTO: People gather inside the Government Science Secondary School in Kankara, Nigeria, Saturday Dec. 12, 2020. Nigerian police say that hundreds of students are missing after gunmen attacked the secondary school in the country’s northwestern Katsina state. Katsina State police spokesman Gambo Isah said in a statement that the Government Science Secondary School in Kankara was attacked Friday night by a large group of bandits who shot with AK-47 rifles. (AP Photo/Abdullatif Yusuf)

LAGOS, Nigeria — Hundreds of Nigerian students are missing after gunmen attacked a secondary school in the country’s northwestern Katsina state, police said, while the president said the military was in gunfights with bandits in a forest as it tried to find the students.

The Government Science Secondary School in Kankara was attacked Friday night by a large group of bandits who shot “with AK-47 rifles,” Katsina State police spokesman Gambo Isah said in a statement.

Police engaged the attackers “in a gunfight that gave (some of) the students the opportunity to scale the fence of the school and run for safety,” Isah said.

About 400 students are missing, while 200 are accounted for, Isah said. The school is believed to have had more than 600 students.

“The police, Nigerian Army and Nigerian Air Force are working closely with the school authorities to ascertain the actual number of the missing and/or kidnapped students,” said Isah. “Search parties are working with a view to find or rescue the missing students.”

A resident of the town, Mansur Bello, told The Associated Press that the attackers took some of the students away.

The military, supported by airpower, has located the bandits’ enclave in Zango/Paula forest in the Kankara area, and there have been exchanges of gunfire in an ongoing operation, said President Muhammadu Buhari, according to a statement issued by his spokesman, Garba Shehu.

”Our prayers are with the families of the students, the school authorities and the injured,” said the president’s statement. It did not say if any students have been rescued.

This attack, the latest on a school by gunmen in Nigeria, is believed to have been carried out by one of several groups of bandits active in northwestern Nigeria. The groups are notorious for kidnapping people for ransom.

The most serious school attack occurred in April 2014, when members of the jihadist group Boko Haram kidnapped 276 girls from their school dormitory in Chibok in northeastern Borno State. About 100 of the girls are still missing.