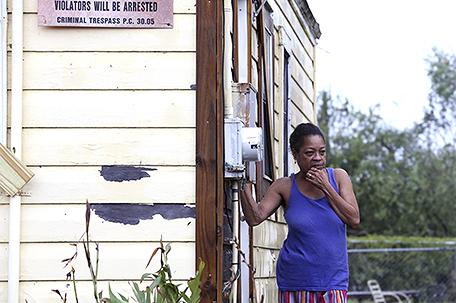 ABOVE PHOTO:  Beverly Perryman stands outside her home and watches as her nephew cuts down a tree with a machete in the Hillcrest neighborhood of Corpus Christi, Texas, on Saturday, Aug. 26, 2017, the morning after Hurricane Harvey. She said, “The house got to shaking. It tore the stuff off our roof.” She doesn’t have insurance. Hillcrest is one of the poorest communities in Corpus Christi. (Rachel Denny/Corpus Christi Caller-Times via AP)

As the remnants of Hurricane Harvey continues its march, the lives that are most devastated are those confined to poor communities of color, as we’ve seen with previous mega storms like Hurricane Katrina.

The New York Times reported that the hurricane — now a tropic storm — drenched parts of Texas throughout Sunday. At least five people died, and more than a dozen have been reported injured, since Harvey struck Texas’s Gulf Coast, dropping up to 25 inches of rain since Friday. Several areas have seen a downpour of as much as 50 inches.

In Houston, as with many other cities, poor communities of color are the most vulnerable during these destructive storms. They tend to live in segregated, flood-prone neighborhoods that are near petrochemical plants, according to The Atlantic.

People in these communities lack the resources to evacuate, and the authorities — despite South Texas’ vulnerability to major storms — have failed to create an evacuation plan.

Houston Mayor Sylvester Turner defended his decision not to order an evacuation for some neighborhoods, KPRC-TV reported.

“You literally cannot put 6.5 million people on the road. If you think the situation right now is bad, you give an order to evacuate, you are creating a nightmare,” Turner stated. “It has to be coordinated. If it’s not done right, you are putting people in harm’s way and creating a far worse situation.”

He told residents that their homes are “the best place” to stay during the storm, the NBC News affiliate reported.

Those who were unable to escape Harvey are “overwhelming” emergency centers with phone calls and tweets for help, The Atlantic stated. Homeless people sought shelter under highways and other low-lying areas to prepare for Harvey. Many of those makeshift shelters are now under water.

KPRC-TV reported that Houston’s 911 center has received more than 56,000 calls since Saturday evening. Police and firefighters have fielded more than 6,000 rescue calls, and more than 1,000 people have been pulled out of flooded homes and streets.

According to the current affairs publication, Texas has failed to fund a plan to control flooding, even though most climate scientists predict an increase in superstorms because of climate change. The most vulnerable are feeling the consequences.

Meanwhile, Harvey is not finished. The storm is expected to create tornadoes and floods in its path, which remains inhabited by poor people of color.

New York Times, The Atlantic, KPRC-TV contributed to this article.