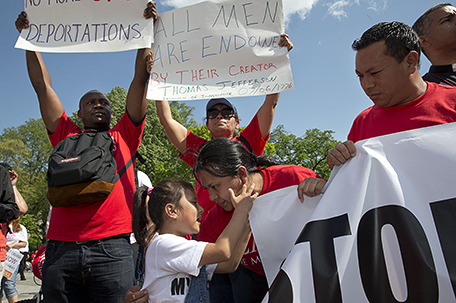 ABOVE PHOTO:  Madai Ledezma-Dominguez, center, says goodbye to her daughter Heather Pina Ledezma, next to her husband Jose Pina, of Riverdale, Md., as the couple took part in an act of civil disobedience and were later arrested on Pennsylvania Avenue in front of the White House in Washington, Thursday, May 1, 2014. The march and rally were in protest of ongoing deportations and lack of progress on comprehensive immigration reform in Congress. (AP Photo/Jacquelyn Martin)

WASHINGTON — House Republicans unveiled a slimmed-down bill Tuesday to address the immigration crisis on the U.S.-Mexico border by sending in National Guard troops and speeding migrant youths back home. The election-year measure would allow Republicans to say they tried to solve the humanitarian problem in South Texas, even though it stands no chance of becoming law.

The bill would cost $659 million through the final two months of this fiscal year, far smaller than the $3.7 billion requested by President Barack Obama for this year and next, and a sharp reduction from the $1.5 billion initially proposed by the House spending committee. The cuts were designed to win over skeptical conservatives and give lawmakers something they could pass before leaving Washington at week’s end for their annual August recess.

The measure also includes policy changes rejected by most Democrats that would allow unaccompanied youths who’ve been arriving by the tens of thousands from Central America to be turned around quickly at the border and sent back home without judicial hearings.

“I think there’s sufficient support in the House to move this bill,” House Speaker John Boehner told reporters after meeting with rank-and-file lawmakers on the issue. “We have a little more work to do though.”

Boehner said the bill would come to a vote on Thursday.

Yet even if it does pass the House, the bill is certain to be rejected by the Democratic-run Senate, which was set to take a procedural vote on its own $2.7 billion border package Wednesday. The Senate bill, which does not include the policy changes embraced by the House, lacks GOP support and seemed unlikely to move forward. So there appeared to be no path to reach a compromise between the House and Senate that could send a bill to Obama’s desk ahead of the five-week congressional recess.

Complicating matters further, Senate Democratic aides floated the idea of using the House border bill as a vehicle for advancing a comprehensive immigration reform bill including a path to citizenship for millions now here illegally. That legislation passed the Senate a year ago but stalled in the House.

House conservatives have warned repeatedly that anything they pass could become a vehicle for the Senate’s comprehensive bill, a scenario House Republican leaders have rejected. The suggestion from Senate Democratic aides that they were contemplating trying to take such a step seemed designed in part to limit conservative support for the border spending bill in the House.

Still, numerous House Republicans have said in recent weeks that they did not want to go back to their districts to face voters without acting to deal with the influx of kids and teens showing up at the South Texas border without their parents, mostly from El Salvador, Honduras and Guatemala. More than 57,000 have arrived since October, many fleeing vicious gangs and trying to reunite with family members, but also drawn by rumors that once here, they would be allowed to stay.

GOP lawmakers said Tuesday that their measure appeared to enjoy widespread support, although some conservatives said they remained opposed.

“Frankly, we need to show that we can act and act thoughtfully, responsibly and quickly,” said Rep. Tom Cole, R-Okla.

Republicans also predicted that Democrats would feel pressured to go along. “If I were a Democrat, and particularly a Democrat from a border state, and I went home without doing anything about this crisis that their own president created, I think I’d be a little bit nervous about doing something like that,” said Rep. Bill Flores, R-Texas.

But most Democrats appeared set to reject the legislation, largely because of the legal change to a 2008 trafficking law that guarantees immigration hearings for unaccompanied kids who arrive here from anywhere other than Mexico or Canada. The House GOP bill would allow the Central American kids to be treated like Mexican kids, who can be turned around quickly at the border unless they can convince Border Patrol agents that they have a credible fear of return meriting additional screenings.

Immigration advocates say this change eliminates needed protections for the kids, and they have pressured Democratic lawmakers to oppose it. The inclusion of such policy changes amounts to “an attempt to discourage any Democratic participation, almost, in the passage of this bill,” said Rep. Joe Crowley, D-N.Y.

The House GOP legislation includes $405 million for the Homeland Security Department, which administration officials have said is in danger of running out of money for customs and border activities in coming months. It includes $22 million to hire more temporary immigration judges and outfit immigration courtrooms with video teleconferencing equipment, and $35 million to double spending for the National Guard presence on the border. In addition, $197 million would go to the Health and Human Services Department for housing and humanitarian assistance for the minors, and $40 million for the governments of Guatemala, Honduras and El Salvador to help with repatriation efforts.

The legislation would prohibit the secretaries of Interior or Agriculture from restricting Border Patrol activities on federal lands and contains a provision expressing the sense of Congress that migrants should not be housed at military bases unless certain conditions are met.