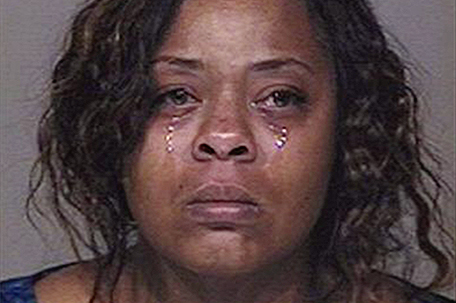 Shanesha Taylor, a woman from Scottsdale, Arizona, is homeless. So when she got asked to come in for a job interview last Thursday, she must have been excited by the prospect. But when you’re homeless, there isn’t always an easy way to take an hour off from watching your kids to be at an interview. That’s how Taylor, 35, wound up losing her children to Child Protective Service — and losing out on the potential job.

Taylor was charged with two felony counts of child abuse for leaving her 6 month-old and 2 year-old in a car with the windows cracked last Thursday for at least 45 minutes as she sat in an interview for a potential job. She told officers that she was homeless, so she couldn’t leave her children in the house, and she had no one else to watch them.

“She was upset,” Sargent Mark Clark, Public Information Officer for Scottsdale Police, told WFSB. “This is a sad situation all around. She said she was homeless, she needed the job. Obviously, not getting the job. So it’s just a sad situation.”

Taylor remains in jail, an official from the Maricopa County Sheriff’s office confirmed, and will likely remain there until her first court date.

It is undeniably very unsafe to leave a child in a locked car. Thirty-eight children suffer heat-related deaths every year from being locked in a vehicle, according to Kids and Cars. But Taylor’s story raises an important issue: People in her situation are left with only bad options.

“It’s reasonable to turn the lens back on us,” Shahera Hyatt, Project Director for the California Homeless Youth Project, told ThinkProgress. “What did we do to not help her find childcare when she had that appointment?”

Hyatt points to her own state, California, which has cut 110,000 subsidized child care slots, about a quarter of the total spots in the program, since 2008, leaving low-income parents with few feasible options for child care on short notice.

Arizona’s child care situation for its low-income residents is, if anything, worse than California’s. In the past four years, the state has cut 40 percent of its total child care budget, $81 million, which led to an estimated 33,000 children who would otherwise be eligible for subsidized care to go without it. (By the numbers, that’s less than California — but Arizona’s population is about one fifth of the Golden State’s.) Between 2012 and 2013, there was a decrease in the number of children served for every single child care program in the state except for Child Protective Services.

But even when child care programs are available, the system to help out parents like Taylor isn’t always responsive enough. “There’s not really a great infrastructure to provide things like that, like child care. Mom got an interview this week? She might be on a waiting list for a really long time. She can’t do it at the last minute,” Hyatt said.

Homeless people also struggle with more than child care when looking for work — they can have difficulty finding an internet connection to apply to job or transportation to get to interviews, clean clothes, or a place to put their belongings. And once they land a job offer, they can run into even more problems, especially if they don’t have things like an ID or birth certificate. It’s a vicious cycle; not having a job perpetuates homelessness, which can in turn make it even harder to find a job.

This is likely the position Taylor found herself in when she had the opportunity to interview last week. She is probably “not an evil, criminal, bad woman,” Hyatt added. “She is just trying to do the right thing.”

Shanesha Taylor was released from jail in the very early hours of Monday, March 31, though her criminal proceedings are far from over.  A woman who identifies herself as a local in the Scottsdale area has started a fund that she says will go toward Shanesha’s bail and, after her release, to taking care of her family.

In the meantime, supporters of Shanesha Taylor and those who want to help can do the following:

2. Sign the following petition to Bill Montgomery who is the County Attorney for Maricopa County. Share the petition with everyone you know. Can we gather 10,000 signatures by Friday? Let’s try.

3. After you have signed the petition, directly EMAIL Bill Montgomery to ask that he DROP THE CHARGES against Ms. Taylor.

4. It’s always great when Prosecutors also receive phone calls. Please call the Maricopa County Attorney’s office to ask them to drop the charges against Shanesha Taylor. Be polite about it but suggest that resources would be better spent providing Ms. Taylor and her children with help over punishment. They have already suffered enough.

7. If you are on Twitter? Contribute your thoughts to the #ISUPPORTSHANESHA because… conversation. Yesterday evening, the conversation trended on Twitter thanks in large part to support from Suey Park.