Holocaust survivors flee from Ukraine to Germany for safety 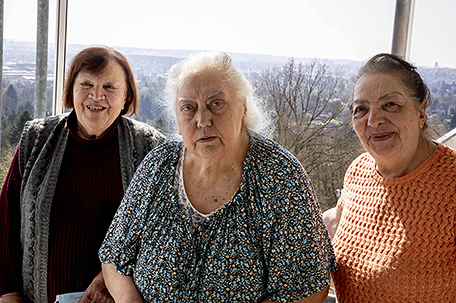 FRANKFURT, Germany — When the bombs started falling on Ukraine’s capital, Kyiv, last month, Tatyana Zhuravliova had a horrible deja vu: the 83-year-old Ukrainian Jew felt the same panic she suffered as a little girl when the Nazis were flying air attacks on her hometown of Odesa.

“My whole body was shaking, and those fears crept up again through my entire body — fears which I didn’t even know were still hidden inside me,” Zhuravliova said.

Her eyes welled up with tears as she remembered how she hid under the table from the bombs during World War II and eventually fled with her mother to Kazakhstan when the Nazis and their henchmen started massacring tens of thousands of Jews in Odesa.

“Now I’m too old to run to the bunker. So, I just stayed inside my apartment and prayed that the bombs would not kill me,” Zhuravliova, a retired doctor, told The Associated Press last Sunday.

But as Russia’s military attacks on Ukraine became even more brutal and demolished residential apartment blocks, she realized that she had to flee again if she didn’t want to die. So Zhuravliova accepted an offer from a Jewish organization to bring her out of Ukraine to safety.

In an unexpected twist of history, some of the 10,000 Holocaust survivors who had been living in Ukraine have now been taken to safety in Germany — the country that unleashed World War II and organized the murder of 6 million Jews across Europe.

Zhuravliova was part of the first group of four Jewish Holocaust survivors evacuated from Ukraine by the New York-based Conference on Jewish Material Claims Against Germany, also referred to as the Claims Conference. The group represents the world’s Jews in negotiating for compensation and restitution for victims of Nazi persecution and their heirs and provides welfare for Holocaust survivors around the globe.

Around 500 Holocaust survivors in Ukraine are especially in need of help because of their ailing health — their evacuation is a top priority, says the JDC.

It’s a highly difficult and complex operation to transport such frail people out of Ukraine, where constant shelling and artillery fire make any evacuation very dangerous. It involves finding medical staff and ambulances in numerous war zones, crossing international borders and even convincing survivors, who are ill and unable to leave their homes without help, to flee into uncertainty again, this time without the vigor of youth.

However, the risks of staying behind are also very high. This month, 96-year-old Boris Romanchenko, who survived several Nazi concentration camps during World War II, was killed during an attack in the Ukrainian city of Kharkiv.

It is not known if any other survivors have been killed in the war in Ukraine, but several have had their homes hit by shelling, says Amos Lev-Ran from the JDC.

“No one can imagine the nightmare survivors have lived through during the Holocaust,” said Ruediger Mahlo, who works for the Claims Conference in Germany. “Now they need to evacuate again — their security, all things familiar are again being stripped from them and they are forced to live with uncertainty and fear.”

Mahlo began coordinating the evacuations less than two weeks ago — speaking to government officials, diplomats, NGOs and border personnel to make it all happen.

“Getting them to a secure place of comfort and providing all we can is a top priority for us,” Mahlo said, adding that he cried with relief after the first group made it out. “Everybody was working like crazy, but still it is a miracle that we got them got out successfully.”

Upon their arrival in Germany, the elderly refugees are taken to Jewish or interfaith nursing homes across the country. As of last week, around 3,500 Ukrainian Jews — young and old — had arrived in Germany, and the government has already offered them a special path to permanent immigration as part of Germany’s ongoing efforts to compensate Jews since the Holocaust.

Overall, German authorities have registered more than 250,000 refugees from Ukraine, although the real numbers are expected to be much higher since they don’t need a visa to enter.

On Friday, Zhuravliova and two other 83-year-old survivors from Kyiv — Larisa Dzuenko and Galina Ulyanova — arrived on the outskirts of Frankfurt after a 26-hour-long trip and were put up at a nursing home. A fourth woman was put up at a different nursing home in the city.

Ulyanova, who is so ill that she hadn’t left her eighth-floor apartment for seven years, had to be carried down the stairs by two men to get on the ambulance in Kyiv. Dzuenko, a retired engineer, suffers from severe diabetes and had to be given intravenous infusions during the long ambulance ride.

Both Ulyanova and Dzuenko were also traumatized as children when they had to escape with their parents from the Nazis. Ulyanova fled to Kyrgyzstan, and Dzuenko to Uzbekistan, before they eventually settled back in Kyiv.

Sitting around a table with red-and-yellow tulips in a sunlit, spacious room in their nursing home on Sunday, the three women seemed relieved to be in Germany.

“Everyone is treating us so nicely here. The food is good, we are safe, and the staff so welcoming,” said Ulyanova, a former nurse.

“When I was a little girl, I had to flee from the Germans with my mom to Uzbekistan, where we had nothing to eat and I was so scared of all those big rats there,” remembered Dzuenko, a woman with a quick smile and big eyes. “All my life I thought the Germans were evil, but now they were the first ones to reach out to us and rescue us.”

Zhuravliova said she was more than grateful to be in Germany now, despite the country’s cruel treatment of Jews in the past.

“To me, it looks like this country has learned from the past and is trying to do something good for us now,” she said.