Historic makeover: Harriet Tubman to be face on $20 bill 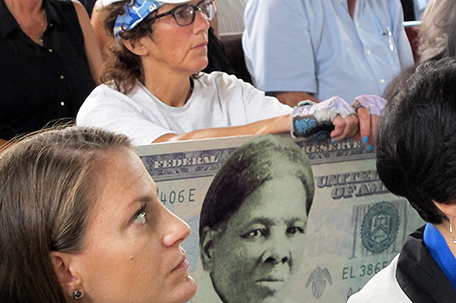 ABOVE PHOTO:  A woman holds a sign supporting Harriet Tubman for the $20 bill last year in 2015, during a town hall meeting at the Women’s Rights National Historical Park in Seneca Falls, N.Y.   Treasury Secretary Jacob Lew announced on Wednesday the decision to make Tubman the new face of the $20 bill and the first African American to be portrayed on U.S. paper money.  (AP Photo/Carolyn Thompson)

WASHINGTON — U.S. paper money is getting a historic makeover.

Harriet Tubman, an African American abolitionist born into slavery, will be the new face on the $20 bill.

The leader of the Underground Railroad is replacing the portrait of Andrew Jackson, the nation’s seventh president and a slave owner, who is being pushed to the back of the bill.

And Alexander Hamilton, the nation’s first Treasury secretary who’s enjoying a revival thanks to a hit Broadway play, will keep his spot on the $10 note after earlier talk of his removal.

The changes are part of a currency redesign announced Wednesday by Treasury Secretary Jacob Lew, with the new $20 marking two historic milestones: Tubman will become the first African American on U.S. paper money and the first woman to be depicted on currency in 100 years.

“This gesture sends a powerful message, because of the tendency in American history, the background of excluding women and marginalizing them as national symbols,” said Riche Richardson, associate professor in the Africana Studies and Research Center at Cornell University. “So even the symbolic significance of this cannot be overstated.”

Lew also settled a backlash that had erupted after he had announced an initial plan to remove Hamilton from the $10 bill in order to honor a woman on the bill. Instead, the Treasury building on the back of the bill will be changed to commemorate a 1913 march that ended on the steps of the building. It will also feature suffragette leaders Lucretia Mott, Sojourner Truth, Susan B. Anthony, Elizabeth Cady Stanton and Alice Paul.

The back of the $20, which now shows the White House, will be redesigned to include the White House and Jackson, whose statute stands across the street in Lafayette Park.

The new image on the $5 bill will include civil rights leader Martin Luther King Jr., who gave his famous “I have a dream” speech on the steps of the memorial in 1963, and Marian Anderson and Eleanor Roosevelt. Anderson, an African-American opera singer, gave a concert at the memorial in 1939 after she had been blocked from singing at the then-segregated Constitution Hall. The Lincoln Memorial concert was arranged by Mrs. Roosevelt.

An online group, Women on 20s, said it was encouraged that Lew was responding to its campaign to replace Jackson with a woman. But it said it wouldn’t be satisfied unless Lew committed to issuing the new $20 bill at the same time that the redesigned $10 bill is scheduled to be issued in 2020.

Lew didn’t go that far Wednesday. But he pledged that at least the designs for all three bills will be accelerated so they’ll be finished by 2020 – the 100th anniversary of passage of the 19th amendment giving women the right to vote. He said the new notes will go into circulation as fast as possible after that, consistent with the need to incorporate new anti-counterfeiting measures in the designs.

U.S. currency has undergone upgrades over the years to stay ahead of counterfeiters. But the updates proposed by Lew for the three bills would be the most sweeping changes since 1929, when all U.S. paper money was redesigned to feature more standard designs and a smaller size to save printing costs.

Lew had initially selected the $10 bill to feature a woman because under the original timetable it was the next bill to be redesigned. But that proposal met fierce objections from supporters of Hamilton, who is enjoying renewed popular interest with the smash Broadway hit musical “Hamilton.”

Tubman, who was born into slavery in the early part of the 19th century, escaped and then used the network of anti-slavery activists and safe houses known as the Underground Railroad to transport other slaves to freedom. After the Civil War, Tubman, who died in 1913, became active in the campaign for women’s suffrage.

Numerous groups have been campaigning to have a woman honored on the nation’s paper currency, which has been an all-male domain for more than a century.

“Not only is this going to be the first African-American historical figure on U.S. currency, but it’s a woman specifically from the era of slavery,” Myers said.

Wednesday’s announcement helped mark a decades-long decline in the reputation of Jackson, once a pillar of the modern Democratic Party but now often defined by his ownership of slaves and the “Trail of Tears” saga that forcibly removed American Indians from their land.

Cherokee Nation Principal Chief Bill John Baker said in a statement that the currency move was a “small but meaningful vindication” for Native Americans.