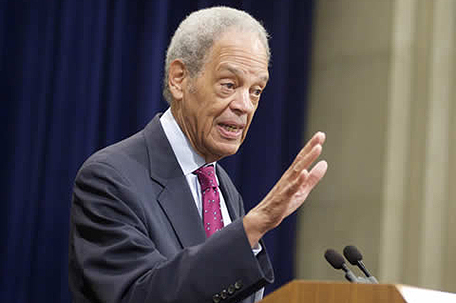 ABOVE PHOTO:  Roger Wilkins, who served as the 2nd National Director of Community Relations Service.  (Photo by Lonnie Tague for The Department of Justice.)

WASHINGTON — Roger Wilkins, a historian, journalist and activist who held a key civil rights post in the Johnson administration, has died. He was 85.

Wilkins’ wife, Patricia King, says he died last Sunday at an assisted-living facility in Kensington, Maryland. King says the cause of death was complications from dementia.

A Pulitzer Prize-winning author and distinguished professor, Wilkins was born in 1932 in Kansas City, Missouri.

He attended the University of Michigan, receiving his B.A. in 1953 and his J.D. in 1956, interning with Thurgood Marshall at the NAACP’s Legal Defense Fund. Following graduation, Wilkins worked in several capacities as an advocate for justice. Beginning his career as a caseworker in the Ohio Welfare Department, Wilkins went on to work for the U.S. Agency for International Development and then as assistant attorney general under President Lyndon B. Johnson.

Wilkins’ interest in legal issues and equality stems partially from his family’s background. His uncle, Roy Wilkins, was executive secretary of the NAACP from 1955 to 1977. In 1972, Wilkins began writing for the editorial page of The Washington Post just as the Watergate scandal was breaking. His critically informed editorials about the issues leading up to President Richard Nixon’s resignation won him a shared Pulitzer Prize, along with reporters Bob Woodward and Carl Bernstein and cartoonist Herb Block. He then moved to The New York Times, where he served as the first African American on its editorial board as well as a columnist.

Subsequently, Wilkins worked for the Institute for Policy Studies, The Washington Star, National Public Radio and CBS Radio. He continues to be a major commentator and analyst on American public policy and social justice issues.

Roger Wilkins retired from teaching at George Mason University in 2007.

In his 1982 memoir, he described the unconscious racism he saw as “the lead black in white institutions for 16 years.”