Hate makes a comeback in the Pacific Northwest 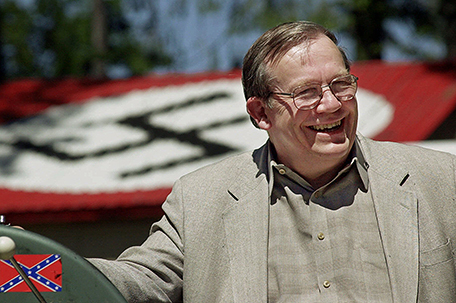 May 30, 2019 Category: Week In Review Posted by: Philadelphia Sun Staff

ABOVE PHOTO: Norm Gissel smiles as he talks about the imminent dismantling of the former headquarters of the Aryan Nations Tuesday, May 22, 2001, in Hayden Lake, Idaho. Behind Gisel is a Nazi insignia painted atop the roof of the compound’s cafeteria. Demolition is expected to begin Wednesday afternoon. (AP Photo/Elaine Thompson)

SPOKANE, Wash. — Nearly two decades after the Aryan Nations’ Idaho compound was demolished, far-right extremists are maintaining a presence in the Pacific Northwest.

White nationalism has been on the rise across the U.S., but it has particular resonance along the Idaho-Washington border, where the Aryans espoused hate and violence for years.

The neo-Nazi group was based near Hayden Lake, Idaho, starting in the 1970s, and eventually was bankrupted in a lawsuit brought by local activists and the Southern Poverty Law Center. Its compound was seized, and supporters dispersed.

But a series of incidents in recent weeks show far-right sentiments never really left the conservative region. In the county that is home to Hayden Lake, for instance, Republicans last month passed a measure expressing support for U.S. entry of a prominent Austrian far-right activist who was investigated for ties to the suspected New Zealand mosque gunman.

In 2018, at least nine hate groups operated in the region of Spokane and northern Idaho, including Identity Evropa, Proud Boys, ACT for America and America’s Promise Ministries, according to the Southern Poverty Law Center. The center does not track how many members belong to each group.

Keegan Hankes, a researcher for the Southern Poverty Law Center, said the number of hate groups is growing across the U.S., driven in part by a toxic political culture. The human rights group counted 784 active hate groups in the U.S. in 2014 and 1,020 in 2018.

In particular, White supremacist groups are growing because of fears that the country’s racial makeup is changing. “That drives a ton of anxiety,” Hankes said.

These new far-right activists are more scattered than the ones who used to gather at the Aryan Nations by the dozens, experts say.

“It is no longer necessary to go to a compound in Hayden Lake, Idaho,” said Kristine Hoover, director of the Gonzaga Institute for Hate Studies in Spokane.

With the proliferation of social media, groups “form in dispersed locations” and gatherings are “more covert,” she said.

In late April, a self-described “American Nationalist” named Brittany Pettibone appeared at a meeting of Kootenai County, Idaho, Republicans to ask for help to bring her boyfriend, Martin Sellner, to the country from Austria. Pettibone, 26, said Sellner wants to marry her and live in Post Falls, Idaho.

Pettibone was a big promoter of the hoax known as “Pizzagate,” telling her online followers Hillary Clinton and other high-profile Democrats were involved in satanic rituals and child sex trafficking tied to a Washington, D.C., pizza restaurant.

Sellner is a leading figure in the extremist “identitarian” movement, which espouses a White nationalist ideology and has swept over Europe amid an influx of migrants and refugees. He has confirmed he exchanged emails with the suspected New Zealand shooter, who donated money to Sellner’s group. But Sellner denies involvement in the attack.

Despite his background, the Kootenai County Republican Central Committee passed a resolution urging the federal government to allow Sellner into the United States. The resolution said the government revoked Sellner’s travel privileges “for political reasons,” and demanded those privileges be reinstated.

Faced with criticism for giving Pettibone a platform, Kootenai County GOP Chair Brent Regan blamed the press. “In its lust for scandal, the media has stretched the committee’s simple act of kindness into headlines that are too bizarre to be fiction,” he wrote in a recent op-ed.

Also last month, The Guardian published internet chats from 2017 in which a Washington state legislator and three other men discussed confronting “leftists” with a variety of tactics, including violence, surveillance and intimidation.

The messages prompted Washington House Democrats to demand that the Republican lawmaker, Rep. Matt Shea of Spokane Valley, be reprimanded for a history of far-right speech and activities. While Shea did not propose violence, he did not speak up when violence was proposed, Democrats said.

House Republican Leader J.T. Wilcox of Yelm responded that Shea should not be punished before investigations are completed. The House, led by Democrats, will conduct an independent investigation of the lawmaker.

Shea, who rarely speaks to reporters, did not return numerous messages from The Associated Press.

He has served in the state House since 2008, introducing bills to criminalize abortion and roll back gun laws and pushing for eastern Washington to secede from the rest of the state. The military veteran attracted international attention in 2018 after a document he wrote laid out a “biblical basis for war” against people who practiced same-sex marriage and abortion, and instructed: “If they do not yield, kill all males.”

In a third case, a nationwide arrest warrant was issued in May for a Stevens County, Washington, man who allegedly tried to extort members of his right-wing militia group through anonymous written threats backed by insinuations they came from a Mexican drug cartel.

James “Russell” Bolton, 51, faces at least six charges of extortion and attempted theft after he was arrested recently in West Virginia.

Stevens County detectives believe he was responsible for a series of anonymous threatening letters delivered to members of the group. The letters purported to come from a Mexican cartel and demanded large sums of cash in exchange for protection.

Hoover, the Gonzaga professor, said it is a mistake to consider all of the above as separate incidents.

“These are movements,” Hoover said, noting participants are not doing this alone. “They have interconnectedness over the internet.”

Rooting for potatoes: The spud makes a comeback