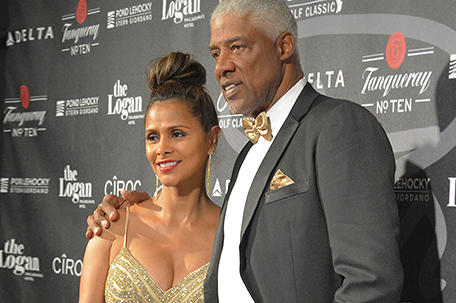 ABOVE PHOTO:  Dorys and Julius Erving

Hall of Famer Julius Erving has been released from a hospital after he became ill at a Philadelphia 76ers’ game.

Erving’s management team said Saturday that Erving had undergone a comprehensive medical evaluation and was expected to make a full recovery.

They did not provide further details.

The 67-year-old attended the game Friday night and rang the ceremonial Liberty Bell before tipoff. The dunker more commonly known as “Dr. J’’ was honored by the team to mark 35 years since he threw down his famous cradle dunk against the Los Angeles Lakers.

Erving led the Sixers to their last NBA championship in 1983 and was 1981 NBA MVP.

In the statement, Erving thanked his friends and fans for their well wishes and prayers.