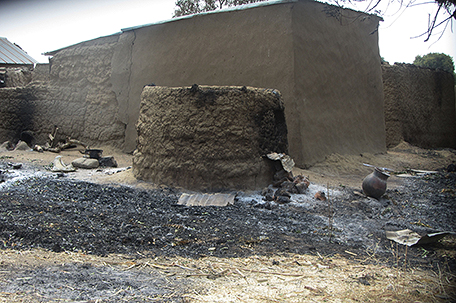 ABOVE PHOTO:  In this photo taken in January, a burned house is pictured following an attack by gunmen, in Wada Chakawa, Yola, Nigeria. Before the usher could finish warning worshippers of the gunmen approaching, the attackers were storming into the church, locking the main door, exploding homemade bombs and firing into the congregation. The shooting continued as some people scrambled to escape out of windows and through the back door of the sacristy.  (AP Photo/ Ibrahim Abdulaziz)

BAUCHI, NIGERIA — Suspected Islamic extremists sprayed gunfire at worshippers and torched four churches Sunday in a village just miles from the town where more than 200 schoolgirls were kidnapped, witnesses said.

At least 30 bodies have been recovered but more are turning up in the bushes, where people tried to escape from Kwada village, said a member of a vigilante group that has had some successes in repelling attacks.

“They killed dozens of people and burned houses after attacking worshippers,” survivor Mallam Yahi told The Associated Press by telephone from Chibok town, to which he escaped.

Some of the church buildings destroyed included the Protestant Church of Christ in Nigeria, the Pentecostal Deeper Life Bible Church and Ekklesiyar Yan’uwa, which is Hausa for Church of the Brethren in Nigeria, Yahi said. American missionaries from Illinois started the last church in the 1920s.

Yahi said the attackers went on to neighboring Kautikari, where they gunned down villagers and burned down homes. The vigilante said they had not yet reached Kautikari so did not know what the death toll was there.

Police spokesman Gideon Jubrin said he could not confirm the attack because bad communications have kept officials from reaching the nearest security post at Chibok, though Associated Press reporters were able to make cell phone calls to the town. Chibok is the town in northeast Borno state from which more than 200 girls were abducted in April. Officials say 219 girls remain captive. Kwada is 10 kilometers (six miles) and Kautikari seven kilometers (four miles) away.

Angry Chibok residents said soldiers were slow to respond to news of the attack, and the vigilantes said that once they reached Kwada, the soldiers refused to confront the extremists directly, only shooting at them from a distance outside the village. They spoke on condition of anonymity for fear of reprisals from the military.

Boko Haram extremists attacked a military camp in the neighboring local government area of Damboa last week and killed at least 51 soldiers. Survivors said they came in armored personnel carriers mounted with anti-aircraft guns and were armed with rocket launchers and submachine guns much heavier than the soldiers’ AK47 assault rifles. The insurgents abducted many soldiers who remain missing, they said.

Boko Haram extremists are demanding the release of detained fighters in return for the kidnapped girls. Nigeria’s President Goodluck Jonathan has been criticized for the slow reaction to the abductions and failure to swiftly rescue the girls. The United States has drones flying to help locate them and other nations have sent experts to help, but negotiations appear stalled.

Nigeria’s military has said it knows where they are but fears any military campaign could get them killed.

Jonathan on Sunday condemned other recent attacks — Friday’s bombing of a hotel that local reports identified as a brothel in Bauchi state, also in the northeast, and sectarian killings of sedentary farmers who are mainly Christian by alleged Fulani Muslim herders in northern Kaduna state.

“The president commiserates with all the families who lost loved ones in the heinous attacks and extends his heartfelt sympathies to all those who suffered injuries or lost their properties during the wanton assaults on Bauchi and Kaduna States,” said a statement. He promised the attackers would be brought to justice.

Jonathan made no mention of the near-daily attacks Boko Haram extremists have been mounting in the area around Chibok, an enclave of mainly Christian people in the majority Muslim north of the country. Bauchi and Kaduna states are governed by Jonathan’s ruling People’s Democratic Party while Borno is held by an opposition governor.

A year-long military state of emergency in three northeastern states, all held by political opponents of Jonathan, has failed to curb the 5-year-old Islamic uprising that has killed thousands of people. The militants have increased the tempo and deadliness of attacks this year, with more than 2,000 people estimated killed compared to 3,600 in all four previous years.

Boko Haram also has increased its theater of operations to bombings in several northern towns and the capital, Abuja, in central Nigeria. Politicians say extremists disguised as Fulani herdsmen have mounted some of the attacks in central Nigeria.

Boko Haram is blamed for last week’s bombing of a shopping mall in the capital Abujathat killed 24 people. Boko Haram claimed two separate bomb attacks at an Abuja bus station in April that killed more than 120 people and wounded about 200.

The extremists want to enforce an Islamic state in Nigeria, Africa’s biggest economy, the continent’s biggest oil producer and its most populous nation of about 170 million people divided almost equally between a majority Muslim north and mainly Christian south.