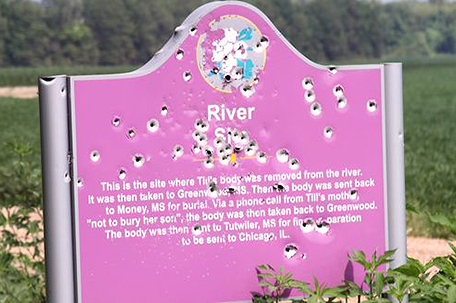 ABOVE PHOTO:  (Emmett Till Memory Project)

Gunmen recently fired bullets into a sign commemorating where Emmett Till’s beaten body was pulled from the Tallahatchie River in 1955 after Roy Bryant and his half brother J.W. Milam murdered the 14-year-old boy. His brutal murder sparked the modern day civil rights movement.

The gunman or gunmen fired more than 40 shots into the sign, which is located two hours north of Jackson, Mississippi. No one has been arrested, but someone placed flowers in front of the site of Milam’s home. The Emmett Till Interpretive Center in Sumner, Miss., is raising funds to replace the sign.

Bryant and Milam kidnapped Till from his great uncle’s and aunt’s home in Money, Miss., on Aug. 28, 1955, for allegedly whistling at Bryant’s wife, Carolyn, after shopping at the Bryant Grocery & Meat Market.

By whistling at Carolyn, Till violated one of the key foundations of white racism—protection of the white woman.

The men tortured Till, tying his body with barbed wire to a 70-pound industrial fan so he sank to the bottom of the Tallahatchie. Two boys playing in or near the river found Till’s body.

Milam and Bryant went to trial for Till’s murder beginning in September 1955, but an all-white male jury acquitted the two in 68 minutes.

The only reason the jury took that long to reach a verdict despite overwhelming evidence of Milam’s and Bryant’s guilt was that the jury had to finish drinking their bottles of Coca Cola.

The verdict was a catalyst for the Montgomery Bus Boycott, one of the most heroic events in African-American civil rights history.

On December 1, 1955, Rosa Parks refused to give up her seat to a white man on a Montgomery, Ala., bus,  sparking a successful 13-month protest.

“I thought about Emmett Till, and I couldn’t go back [to the back of the bus],” Parks said.

Although the jury acquitted them, Milam and Bryant confessed to murdering Till in a Look magazine article, published in January 1956. Look paid them $3,150.

Till is buried in Chicago’s Burr Oak Cemetery, but his casket was purchased by the Smithsonian’s National Museum of African American History and Culture in Washington, D.C. At the insistence of Emmett Till’s mother, the casket was fitted with a clear glass top so that the world could witness the state of her son’s body, the incontrovertible evidence of the brutality of his death.