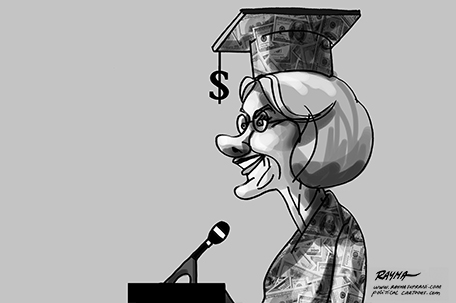 By Julianne Malveaux
NNPA
Eighty HBCU Presidents did a “fly-in” to the White House in a meeting organized by Trump whisperer Omarosa, South Carolina Senator Tim Scott (R-S.C.), and others. There was a White House meeting, a meeting at the Library of Congress, and more buzz than twenty beehives. People were prepped to hear that the White House Initiative for Historically Black Colleges and Universities (HBCUs) would move from the Department of Education to the White House and that this would have an impact on the resources HBCUs would receive from this president’s budget.

Can somebody say “hoodwinked?” Sure, the HBCU presidents came to Washington and got their photo-op with our nation’s 45th president (I’ll just call him “45”), but the listening session that was scheduled with some of President Donald Trump’s cabinet members was interrupted in favor of the photo-op, which means that many of the presidents that were tapped to speak and who had prepared remarks did not have the opportunity to deliver them. Notably, Dillard University President Walter Kimbrough posted his remarks online, and made a few media appearances sharing his dissatisfaction. Outgoing Morehouse College President John Silvanus Wilson shared his disappointment in a letter with the Morehouse community.

To be sure, HBCU presidents are caught between a rock and a hard place when it comes to President Trump. HBCUs have often done well under Republican presidents because they are low-hanging fruit. Located in the deeply Republican South, the senators who represent their states get points when they do the right thing–as do presidents who increase Pell grants and Title III dollars–and encouraging contract opportunities with government departments.

Those who didn’t show up to the “fly-in” probably incurred the wrath of the vindictive Omarosa, who said she was “taking names” and that “45’s” detractors would have to “bow down” to him. Presidents pretty much had to show up, and hope for the best. They went home empty-handed, with an executive order moving the White House Initiative on HBCUs into the White House, but with no additional resources to manage it. There was also lofty but resource-devoid language in this executive order.

And can we just call Education Secretary Betsy DeVos “One-Note Betsy?” Wherever she looks, she sees school choice, although our educational challenges transcend her myopic agenda. If an ant, enticed by honey, entered a charter school instead of the public school next door, she’d call that school choice. Still, there is no way she can justify her historically ignorant and irresponsible remarks about HBCUs and school choice.

In describing HBCUs and “real pioneers of school choice,” she ignored our nation’s higher education history that offered no choice for African-Americans who wanted a college education. She has since backpedaled her remarks, but she clearly is comfortable with her historical ignorance.
Dr. Dorothy Irene Height was accepted to Barnard College in 1929 on a speech scholarship, but was turned down when she showed up on campus and it was discovered that she was a Negro.

It was rescinded because the school had already reached their quota of two Black students that year. She matriculated at New York University instead and earned an undergraduate degree in 1932 and a master’s degree in educational psychology in 1933. Charlayne Hunter-Gault and Hamilton Holmes chose to attend the University of Georgia, but their matriculation generated headlines because White folks were not prepared to accept Black students in 1961. Vivian Malone and James Hood chose to attend the University of Alabama, but Gov. George Wallace blocked their entrance in 1963. When James Meredith chose to attend the University of Mississippi, the National Guard facilitated his enrollment. How dare you, Betsy DeVos, talk about school choice to HBCU leaders, when our very reason for existence was that choices were few and far between.

One-Note Betsy is a frightening manifestation of ignorance. She is a songbird that must be muzzled before she further demonstrates her utter lack of knowledge. No matter what his rhetoric about HBCUs, our 45th President’s choice for Secretary of Education suggests that history and logic are not part of her portfolio. This woman has a clear one-note agenda. It does not include support for the public schools that most students will attend. She is our nation’s policy leader on educational issues, and yet she simmers in educational ignorance.

She doesn’t understand history, nor HBCUs, nor the challenges that African American students have overcome in an educational system that is extremely racially biased. Can someone lock her up in the National Museum of African American History and Culture for a week or two? Or present her with classic tomes like “The Souls of Black Folks” by W.E.B. Du Bois (note the spelling, Betsy), and “The Miseducation of the Negro” by Carter G. Woodson to read before she offers another utterance?

Julianne Malveaux is an author, economist, and Founder of Economic Education. Her latest book “Are We Better Off? Race, Obama and Public Policy” is available to order at www.juliannemalveaux.com at Amazon.com. Follow Dr. Malveaux on Twitter @drjlastword.