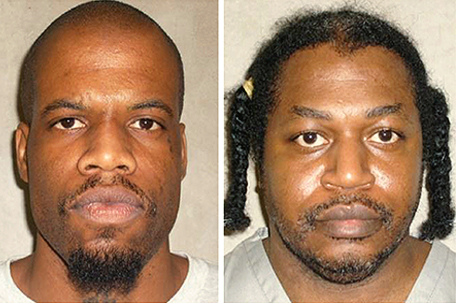 May 4, 2014 Category: Week In Review Posted by: Philadelphia Sun Staff

ABOVE PHOTO:  This photo combo of images provided by the Oklahoma Department of Corrections shows Clayton Lockett, left, and Charles Warner. Lockett and Warner, two death-row inmates who want to know the source of drugs that will be used to execute them, have placed Oklahoma’s two highest courts at odds and prompted aggravated members of the Legislature to call for the impeachment of Oklahoma Supreme Court justices.  (AP Photo/Oklahoma Department of Corrections)

OKLAHOMA CITY— Oklahoma Gov. Mary Fallin named a member of her Cabinet on Wednesday to lead a review of how the state conducts executions after a botched procedure that the White House said fell short of the humane standards required.

Fallin said Clayton Lockett, who had an apparent heart attack 43 minutes after the start of an execution in which the state was using a new drug combination for the first time, had his day in court.

“I believe the death penalty is an appropriate response and punishment to those who commit heinous crimes against their fellow men and women,” Fallin said. “However, I also believe the state needs to be certain of its protocols and its procedures for executions and that they work.”

Lockett convulsed violently and tried to lift his head after a doctor declared him unconscious, and prison officials halted the execution. Fallin said “an independent review” would be effective and appropriate.

The governor said the review, to be led by Department of Public Safety Commissioner Michael Thompson, will focus on Lockett’s cause of death and that an independent pathologist will make that determination. The review will also look at whether the department followed the current protocol correctly and will include recommendations for future executions.

Fallin said a stay for Charles Warner, who had been scheduled to die two hours after Lockett, is in place until May 13. She said Warner’s execution will be further delayed if the review is not complete by then.

Warner’s attorney objected to the investigation being led by a member of Fallin’s Cabinet.

“I don’t consider that to be an independent investigation,” said lawyer Madeline Cohen.

Attorney General Scott Pruitt, whose office has worked to keep secret details about the execution drugs, said he intends to assign investigators to work with Thompson.

The Oklahoma Board of Corrections planned to meet in a closed-door session Thursday to discuss the investigation and “possible litigation” connected to Lockett’s execution. The department did not immediately respond to a request for details.

Lockett, 38, had been declared unconscious 10 minutes after the first of three drugs in the state’s new lethal injection combination was administered Tuesday. Three minutes later, he began breathing heavily, clenching his teeth. The blinds were lowered to prevent those in the viewing gallery from watching, and the state’s top prison official later halted the proceedings. Lockett died of a heart attack shortly thereafter, the Department of Corrections said. Officials later blamed a ruptured vein for the problems with Lockett’s execution.

Previously, most executions in Oklahoma, which used different fast-acting barbiturates, were completed and the inmate declared dead within about 10 minutes of the procedure’s start.

“But it’s also the case that we have a fundamental standard in this country that even when the death penalty is justified, it must be carried out humanely,” Carney said. “Everyone would recognize this case fell short of this standard.”

Lockett was convicted of shooting 19-year-old Stephanie Neiman and watching as two accomplices buried her alive in rural Kay County in 1999. Neiman and a friend had interrupted the men as they robbed a home.

The medical examiner’s office said the toxicology portion of the autopsy to determine what drugs were in Lockett’s system had begun and the surgical portion will be conducted by an independent pathologist. Spokeswoman Amy Elliott initially said it could take two to four months to complete the toxicology report, but later said she expects the results sooner since they were sent to an independent laboratory for analysis.

Pruitt had said the lower dosage would ensure the state maintains an adequate supply for future executions. The state had information indicating that at that dose, “you go to sleep doggone quick,” he said.

Lockett and Warner had sued the state for refusing to disclose details about the execution drugs. The state Supreme Court later dismissed the inmates’ claim.