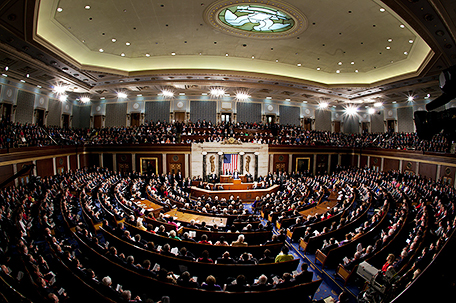 ABOVE PHOTO:  President Barack Obama delivers his State of the Union address in the House Chamber at the U.S. Capitol in Washington, D.C., Jan. 25, 2011.  (Official White House Photo by Lawrence Jackson)

WASHINGTON — Republicans pushed a divided House Wednesday toward a campaign-season lawsuit against President Barack Obama, accusing him of deliberately exceeding the bounds of his constitutional authority. Obama and other Democrats derided the effort as a stunt aimed at tossing political red meat to conservative voters.

Just a day before lawmakers were to begin a five-week summer recess, debate over the lawsuit underscored the harshly partisan tone that has dominated the current Congress almost from its start in January 2013.

Republicans said the legal action, focusing on Obama’s implementation of his prized health care overhaul, was designed to prevent a further presidential power grab and his deciding unilaterally how to enforce laws. They scoffed at Democratic claims that it would be a waste of taxpayers’ money.

“What price do you place on the continuation of our system of checks and balances? What price do you put on the Constitution of the United States?” said Rep. Candice Miller, R-Mich. “My answer to each is `priceless.’”

Republicans have repeatedly accused Obama of exceeding his powers in a range of areas, saying he has enforced provisions he likes and ignored others.

These include not notifying Congress before releasing five Taliban members from the U.S. military prison at Guantanamo Bay, Cuba, in exchange for captive Army Sergeant Bowe Bergdahl, blocking the deportation of some children who are in the U.S. illegally and waiving some provisions of the No Child Left Behind education law.

However, Democrats said the lawsuit was simply designed to encourage conservatives to vote in this November’s congressional elections. They also warned that it could be a precursor of a more drastic GOP effort. Said Rep. Louise Slaughter, D-N.Y.: “The lawsuit is a drumbeat pushing members of the Republican Party to impeachment.”

In fact, Democrats already are using that argument to mine campaign contributions. About two hours before the House was to vote, House Democrats emailed a fundraising solicitation to supporters saying, “Republicans have said this lawsuit has `opened the door’ to impeachment.” It asked for support for Democrats who “will finally put a stop to the Tea Party crazies and get President Obama’s back.”

Some prominent conservatives including former Republican vice presidential candidate Sarah Palin have called for Obama’s impeachment, and some House GOP lawmakers have not ruled it out. House Speaker John Boehner, R-Ohio, has said he has no such plans and has called Democratic impeachment talk a “scam” to raise money.

“Impeachment is off the table. Why hasn’t the speaker said that,” said House Minority Leader Nancy Pelosi, D-Calif.

On the road in Kansas City, Missouri, Obama cast the lawsuit as a “political stunt” and a distraction from the public’s priorities.

“Every vote they’re taking like that means a vote they’re not taking to actually help you,” he told his audience. He urged Republicans to “stop just hating all the time.”

As for the lawsuit’s chances of legal success, federal courts are often reluctant to intervene in disputes between the executive and legislative branches. For the suit to survive, the GOP would first have to prove that the House had been injured by Obama’s actions. And even if the lawsuit was heard, it is unclear whether it could be decided while Obama was still in office.

Timothy K. Lewis, a former judge in the 3rd U.S. Circuit Court of Appeals who was nominated by former President George H.W. Bush, said that, with appeals, it would take at least one-and-a-half to two years for the suit to wind through the federal judicial system.

Still, Rep. Doug Lamborn, R-Colo., said, “The people’s representatives will not turn a blind eye to the lawlessness of this president. We will do whatever it takes to hold him and future occupants of the Oval Office accountable.”

Democrats say Obama has acted legally and has simply used the authority he has as chief executive.

Said Rep. Hakeem Jeffries, D-N.Y.: “The House majority has chosen to act up and to act out in order to satisfy the thirst of the blame Barack Obama caucus.”

The planned lawsuit would accuse Obama of selectively carrying out the 2010 health care law. That will put House Republicans in the position of asking the courts to hold Obama to the letter of a law that they all opposed and that the House has voted over 50 times to dismantle.

Republicans have particularly objected that Obama has twice delayed the law’s so-called employer mandate. The provision requires companies with 50 or more employees working at least 30 hours weekly to offer health care coverage or pay fines, while businesses with fewer than 50 workers are exempt.

The requirement was initially to take effect this year. Now, companies with 50 to 99 employees have until 2016 to comply while bigger companies have until next year.

Democrats warned that the lawsuit could cost taxpayers millions of dollars. Republicans provided no specifics about the potential price tag, but the measure would allow House attorneys to hire outside lawyers and require quarterly public reports on expenditures.

Republicans have not laid out a timetable for actually filing the suit.