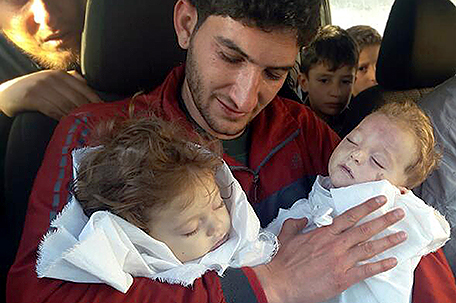 ABOVE PHOTO:  In this picture taken on Tuesday April 4, 2017, Abdul-Hamid Alyousef, 29, holds his twin babies who were killed during a suspected chemical weapons attack, in Khan Sheikhoun in the northern province of Idlib, Syria. Alyousef also lost his wife, two brothers, nephews and many other family members in the attack that claimed scores of his relatives. The death toll from a suspected chemical attack on a northern Syrian town rose to 72 on Wednesday as activists and rescue workers found more terrified survivors hiding in shelters near the site of the harrowing assault, one of the deadliest in Syria’s civil war. (Alaa Alyousef via AP)

WASHINGTON — Two Republican senators are calling on President Donald Trump to take out Syria’s air force as part of a swift and forceful response to a chemical weapons attack that killed more than 80 people, including more than two dozen children.

Sens. John McCain of Arizona, who spoke to Trump on Wednesday, and Lindsey Graham of South Carolina said in a statement Thursday that Syrian President Bashar Assad “has crossed a line” and “must pay a punitive cost for this horrific attack.”

“This is a test of the new administration, but also for our entire country,” said Graham and McCain, who have been among Trump’s harshest congressional critics. “Assad is trying to see what he can get away with.”

Graham later told reporters he doesn’t believe Trump needs Congress to authorize the use of military force in Syria. He added that the Senate has become so dysfunctional it may be difficult to get Republicans and Democrats to agree on a resolution approving the use of force.

“Hit this guy,” Graham said of Assad. “You’ve got my full permission.” He said he has not talked to Trump about military options.

But Sen. Bob Corker, the Republican chairman of the Foreign Relations Committee, took a more measured approach, saying he first wanted to hear from the White House what military options it may be considering.

Asked if he supported grounding Syria’s air force, Corker told reporters he’d “like to see what the administration proposes.”

Corker acknowledged that the president has the authority to order military action quickly. But, he said, “the prudent course of action would be for him to come to Congress and consult and discuss privately what he’s going to do.”

The Trump administration and other Western officials have blamed the chemical attack on Syrian government forces. Syria has denied the allegations.

Graham and McCain said Syria’s air force “provides Assad a strategic advantage in his brutal slaughter of innocent civilians, both through the use of chemical weapons as well as barrel bombs, which kill far more men, women and children on a daily basis.”

They said the U.S. military, with its allies, has the capability to ground Syria’s air force quickly and decisively.