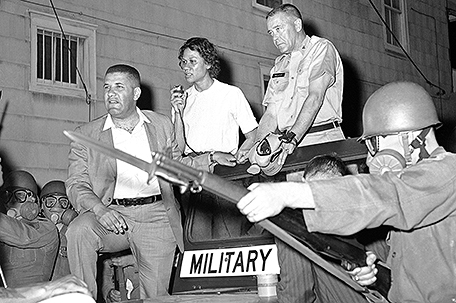 ABOVE PHOTO: In this May 11, 1964, file photo, masked National Guardsman with their bayonets held at the ready surround the jeep of Brig. Gen. George Gelson, head of the guard unit, as Stanley Branche, chairman of the Committee for Freedom Now, left, and Gloria Richardson, second from left, stands beside him in Cambridge, Md. Richardson, an influential yet largely unsung civil rights pioneer whose determination not to back down while protesting racial inequality was captured in a photograph as she pushed away the bayonet of a National Guardsman, died Thursday, July 15, 2021, in New York, according to Joe Orange, her son in law. She was 99.   (AP Photo/William Smith, File)

ANNAPOLIS, Md. — Gloria Richardson, an influential yet largely unsung civil rights pioneer whose determination not to back down while protesting racial inequality was captured in a photograph as she pushed away the bayonet of a National Guardsman, has died. She was 99.

Tya Young, her granddaughter, said Richardson died in her sleep last Thursday in New York City and had not been ill. Young said while her grandmother was at the forefront of the civil rights movement, she didn’t seek praise or recognition.

“She did it because it needed to be done, and she was born a leader,” Young said.

Richardson was the first woman to lead a prolonged grassroots civil rights movement outside the Deep South. In 1962, she helped organized and led the Cambridge Movement on Maryland’s Eastern Shore with sit-ins to desegregate restaurants, bowling alleys and movie theaters in protests that marked an early part of the Black Power movement.

“I say that the Cambridge Movement was the soil in which Richardson planted a seed of Black power and nurtured its growth,” said Joseph R. Fitzgerald, who wrote a 2018 biography on Richardson titled “The Struggle is Eternal: Gloria Richardson and Black Liberation.”

Richardson became the leader of demonstrations over bread and butter economic issues like jobs, health care access and sufficient housing.

“Everything that the Black Lives Matter movement is working on right now is a continuation of what the Cambridge Movement was doing,” Fitzgerald said.

In pursuit of these goals, Richardson advocated for the right of Black people to defend themselves when attacked.

“Richardson always supported the use of nonviolent direct action during protests, but once the protests were over and if Black people were attacked by whites she fully supported their right to defend themselves,” Fitzgerald said.

Richardson was born in Baltimore and later lived in Cambridge in Maryland’s Dorchester County — the same county where Harriet Tubman was born. She entered Howard University when she was 16. During her years in Washington, she began to protest segregation at a drugstore.

In 1962, Richardson attended the meeting of the Student Nonviolent Coordinating Committee in Atlanta and later joined the board.