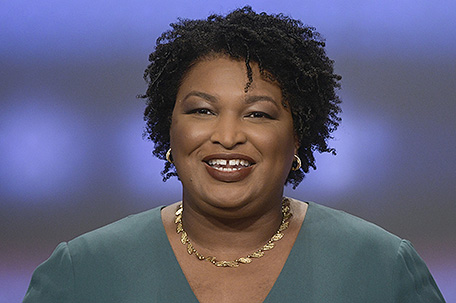 ABOVE PHOTO:  Georgia Democratic gubernatorial candidate Stacey Abrams participates in a debate against Stacey Evans in Atlanta. In Georgia, black women will likely factor into one of the country’s marquee political contests. The Democratic race for governor features two women, and candidate Abrams is running to become the first black woman ever elected governor in America. (AP Photo/John Amis)

Abrams set new historical marks with a primary victory Tuesday that made her the first Black nominee and first female nominee for governor of either majority party in Georgia.

Voters also picked nominees in Kentucky, Arkansas and Texas ahead of the November midterms. A closer look at key story lines:

Democrats were set to nominate a woman for governor either way, with Stacey Abrams and Stacey Evans battling it out in a pitched primary fight.

But the 44-year-old Abrams stood out in her bid to be the nation’s first African-American woman to lead a state. The former state General Assembly leader was insistent that the way to dent Republican domination in Georgia wasn’t by cautiously pursuing the older White voters who had abandoned Democrats over recent decades. Rather, she wanted to widen the electorate by attracting young voters and nonwhites who hadn’t been casting ballots.

She will test her theory as the underdog against either Lt. Gov. Casey Cagle or Secretary of State Brian Kemp, who will meet in the Republican runoff in July. Cagle led a five-man Republican field, with Kemp qualifying for the second spot after a campaign that was a sprint to the right on everything from immigration to support for President Donald Trump.

Kemp promised to keep pulling in that direction, with Cagle trying to balance the demands of a conservative primary electorate with his support from the business establishment. The scenario worried some Georgia Republicans who were accustomed to centrist, business-aligned governors who rarely flouted Atlanta-based behemoths like Delta and Coca-Cola.

Texas had three House runoffs that will be key to whether Democrats can flip the minimum 24 GOP-held seats they would need for a majority in next year’s Congress. All three were among 25 districts nationally where Trump ran behind Hillary Clinton in 2016. Democrats nominated women in two of the districts and a Black man in the third.

Attorney Lizzie Fletcher far outpaced activist Laura Moser in a metro-Houston congressional contest that became a proxy for Democrats’ fight between liberals and moderates. National Democrats’ campaign committee never endorsed Fletcher, but released opposition research against Moser amid fears that she was too liberal to knock off vulnerable Republican Rep. John Culberson in the fall.

In a San Antonio-Mexican border district, Gina Ortiz Jones, an Air Force veteran and former intelligence officer, got Democrats’ nod to face Republican Rep. Will Hurd in November. Jones would be the first openly lesbian congresswoman from her state. Hurd is Black.

Former NFL player Colin Allred won a battle of two attorneys and former Obama administration officials in a metro-Dallas House district. Allred, who is Black, topped Lillian Salerno and will face Republican Rep. Pete Sessions in November. The Democratic Congressional Campaign Committee lined up behind Allred after the group’s initial favorite failed to make the runoff.

Among Republicans, Texas Sen. Ted Cruz showed off his endorsement muscle, with his former chief of staff, Chip Roy, winning a competitive runoff for a San Antonio-area congressional seat opened by the retirement of Rep. Lamar Smith.