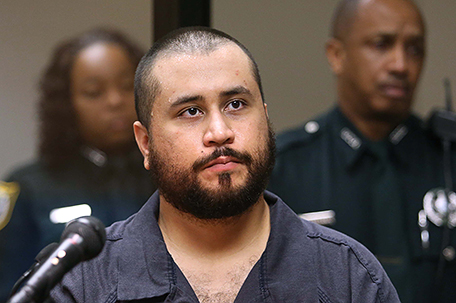 A Twitter account that allegedly belongs to child killer George Zimmerman retweeted an image of Trayvon Martin’s body laying on the wet grass on the night Zimmerman shot him to death, Raw Story reports.

Zimmerman, who has been hiding his violence and racism a lot less lately, retweeted a follower who called him a “one-man army,” with an image of the slain teen.

“Last month, the acquitted killer of Trayvon Martin got into a Twitter fight with someone who threatened to slap him by referencing the death of Martin and writing: “We all know how it ended for the last moron that hit me. Give it a whirl cupcake.”

Since being acquitted by a jury in the slaying of Martin in 2012, Zimmerman’s life has been a series of run-ins with the police and altercations with his ex-wife and girlfriends who have accused him of assaulting them.”

When the account first appeared on Twitter, a user claiming to be Zimmerman confirmed the authenticity of the account. Since that time, however, the freedom in which he uses racial slurs has some people questioning if it really is him.

From calling Black people “apes” and “slime,” to saying that he hasn’t been assassinated because Black people are nothing but “cowards,” Zimmerman has spent the majority of his time trolling Trayvon Martin supporters with increasingly inflammatory tweets and selling racist artwork, including renderings of the Confederate flag.