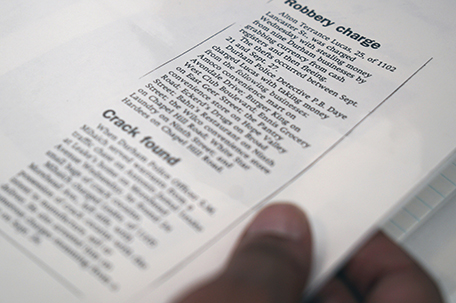 ABOVE PHOTO: Musician Youtha Anthony Fowler, known as “DJ Nabs,” looks at an old newspaper clipping, top, about his lifelong best friend, Alton Lucas, in his home studio outside of Raleigh, N.C., on Saturday, June 26, 2021. At the height of the war on drugs, Lucas went to jail for a series of robberies he says were committed to feed his crack cocaine habit. (AP Photo/Allen G. Breed)

WASHINGTON — Attorney General Merrick Garland has taken action to end sentencing disparities that have imposed harsher penalties for different forms of cocaine and worsened racial inequity in the U.S. justice system. For decades federal law has imposed harsher sentences for crack cocaine even though it isn’t scientifically different from powder cocaine, creating “unwarranted racial disparities,” Garland wrote in a memo Friday to federal prosecutors. “They are two forms of the same drug, with powder readily convertible into crack cocaine.”

With changes to the law stalled in Congress, Garland instructed prosecutors in nonviolent, low-level cases to file charges that avoid the mandatory minimum sentences that are triggered for smaller amounts of rock cocaine. Civil rights leaders and advocates for criminal justice change applauded Garland, though they said his move will not become permanent without action from Congress.

The Rev. Al Sharpton led marches in the 1990s against the laws he called “unfair and racially tinged” and applauded the Justice Department direction that takes effect within 30 days.

“This was not only a major prosecutorial and sentencing decision – it is a major civil rights decision,” he said in a statement. “The racial disparities of this policy have ruined homes and futures for over a generation.”

At one-point, federal law treated a single gram of crack the same as 100 grams of powder cocaine. Congress shrunk that gap in 2010 but did not completely close it. A bill to end the disparity passed the House last year but stalled in the Senate.

“This has been one of the policies that has sent thousands and thousands of predominantly Black men to the federal prison system,” said Janos Marton, vice president of political strategy with the group Dream.org. “And that’s been devastating for communities and for families.”

While he welcomed the change in prosecution practices, he pointed out that unless Congress acts, it could be temporary. The bill that passed the House with bipartisan support last year would also be retroactive to apply to people already convicted under the law passed in 1986.