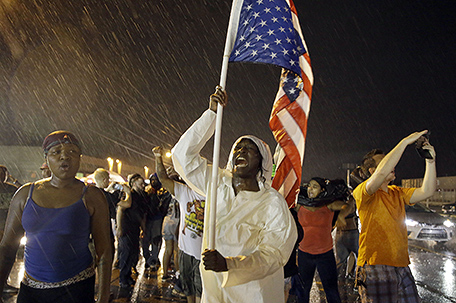 By Jim Salter and Jim Suhr

FERGUSON, Mo. — Police arrested nearly two dozen people in Ferguson during a protest that stretched into early Tuesday marking the anniversary of the fatal shooting of 18-year-old Michael Brown, although there was no repeat of the violence that scarred weekend demonstrations.

There were no shots fired and no burglaries, looting or property damage during the protest along West Florissant Avenue, county police spokesman Shawn McGuire said. The St. Louis suburb thoroughfare was the focus of months of massive protests and sometimes violent unrest last summer after the killing of Brown by a Ferguson police officer.

But on Monday night, no smoke or tear gas was used, and no police or civilians reported injuries, McGuire said in a statement. By 1 AM, the crowd and police were heading home.

McGuire said approximately 23 arrests were made, though police were still confirming official totals. 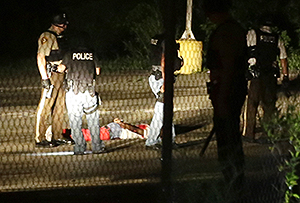 Police stand near a suspect in a parking lot after gunfire during a protest on the anniversary of the death of Michael Brown, Sunday, Aug. 9, 2015, in Ferguson, Mo. St. Louis County Police Chief Jon Belmar said that plainclothes officers had been tracking the man, who they believed was armed, during the protest. Belmar said the man opened fire on police and was struck when the officers returned fire. The man was taken to a hospital, where Belmar said he was in surgery early Monday morning. (AP Photo/Jeff Roberson)

Late Sunday, a protest in the same area was interrupted by gunfire and a police shooting that left an 18-year-old suspect critically injured. The violence set Ferguson on edge and had protest leaders worried that tensions could escalate. St. Louis County Executive Steve Stenger declared a state of emergency that authorized county Police Chief Jon Belmar to take control of police emergency management in and around Ferguson.

Early Monday evening, hundreds of protesters were chanting, beating drums and carrying signs. When some in the group moved into a traffic lane, officers in riot gear forced people out of the street. Some demonstrators threw water bottles and other debris at officers.

“They’re not going to take the street tonight,” Belmar told The Associated Press: “That’s not going to happen.”

Members of an armed militia group patrolling the streets of Ferguson early Tuesday, have drawn criticism from the county police chief overseeing security in the St. Louis suburb.

The street has been the focus of demonstrations marking the anniversary of the shooting death of 18-year-old Michael Brown.

The Associated Press left a message with John Karriman, a representative of the group in Missouri.

Belmar plans to ask county prosecutor Bob McCulloch about the legality of the group’s armed patrols.Protests also cropped up outside Ferguson. Almost 60 people, including scholar and civil rights activist Cornel West, were arrested around midday Monday for blocking the entrance to the federal courthouse in downtown St. Louis. Another group later briefly blocked Interstate 70 during the late afternoon rush hour, with an additional 64 arrests, according to McGuire.

At the Sunday night demonstration, tensions escalated after several hundred people gathered in the street, ignoring repeated warnings to get to the sidewalk or face arrest. Several gunshots rang out from an area near a strip of stores, including some that had been looted moments earlier. The shots sent protesters and reporters running for cover.

Belmar said he believed there were six shooters, including 18-year-old Tyrone Harris Jr., who the police chief said opened fire on officers.

Police had been watching Harris during the protest out of concern that he was armed, he said.

During the gunfire, Harris crossed the street and apparently spotted plainclothes officers arriving in an unmarked van with distinctive red and blue police lights, Belmar said. Police said the suspect shot into the windshield of the van.

The four officers in the van fired back, then pursued him on foot. The suspect again fired on the officers when he became trapped in a fenced-in area, Belmar said, and all four opened fire.

Harris was in critical condition after surgery Monday. Prosecutors announced 10 charges against him – five counts of armed criminal action, four counts of first-degree assault on a law enforcement officer and a firearms charge. All 10 are felonies.

The officers in the van were wearing protective vests and escaped injury. They were not wearing body cameras, Belmar said.

Harris’ father called the police version of events “a bunch of lies.”

Tyrone Harris Sr. told The Associated Press that two girls who were with his son told him the 18-year-old was unarmed. They said he had been drawn into a dispute involving two groups of young people and was “running for his life” after the gunfire broke out. He said his son was a close friend of Michael Brown and was in Ferguson on Sunday night to pay respects.

“My son was running to the police to ask for help, and he was shot,” Harris said. “It’s all a bunch of lies … They’re making my son look like a criminal.”

Online court records show that Tyrone Harris Jr. was charged in November with stealing a motor vehicle and a gun, as well as resisting arrest by fleeing. A court hearing in that case is scheduled for Aug. 31. 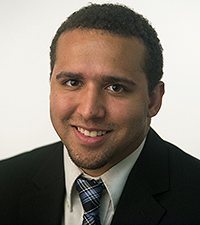 The National Association of Black Journalists expresses concern with the decision by prosecutors in St. Louis County, Missouri to charge Wesley Lowery of The Washington Post with trespassing and interfering with a police officer.

The charges stem from an incident that took place as Lowery, 25, was in Ferguson, Missouri in 2014 to report on the shooting death of Michael Brown, a black teen, by a white police officer.

“Reporters have every right to do their jobs, pursue the truth and publish it,” NABJ President Sarah Glover said.

The association is troubled by the action taken by prosecutors and believe it to be a direct assault on the free exercise of the First Amendment, which ensures journalists can practice their craft. Journalists understand citizens, including journalists, must respect the rule of law, but as the Supreme Court of the United States noted in its 1972 decision in Branzburg v. Hayes,”… without some protection for seeking out the news, freedom of the press could be eviscerated.”

The organization believes Lowery acted reasonably in pursuit of news and information needed by the public in the aftermath of the shooting death of Brown and in light of ensuing unrest in Ferguson. The initial decision to release Lowery without filing charges also suggests that authorities themselves believed that his initial arrest could have been an abuse of power and discretion. The organization encourages local officials to drop the charges filed against Lowery so journalists can operate without fear that doing their jobs will lead to them being jailed.