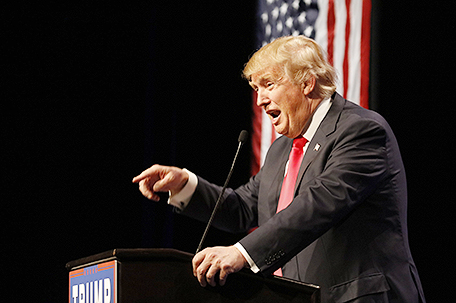 Last night was a clear win for the Democrats. Secretary Clinton displayed her strength, stamina, and expertise, while Trump wilted under the pressure and ran out of gas.

It was a clean sweep for the Democratic nominee, but there were four specific moments of many from the debate that showed that Donald Trump doesn’t have the knowledge, values and temperament to be president.

Every major party nominee since 1976 has released their tax returns, except for Donald Trump. He tried to wriggle out of it with the excuse that he’s under audit, although experts have said that an audit does not preclude someone from releasing their tax returns.

When Clinton pressed him on the fact that he hadn’t paid any income tax at all during some years, Donald Trump said “that makes me smart.” But Clinton was ready – she hit back that troops, veterans, schools, and health care all suffered because of Trump’s tax avoidance.

Back in 2006, Trump said, “I sort of hope” the real estate market tanks “because then people like me would go in and buy.” He continued: “If there is a bubble burst, as they call it, you know you can make a lot of money.”

When given the chance to explain his comments, Trump had a cold and callous response: “That’s called business.”

Trump’s response was a slap in the face to every family that lost a job or their home in the Great Recession, and a reminder that we can’t go back to the policies that were in place when the financial crisis struck.

This moment underscores the fact that Donald Trump is only out for himself – further illustrated by Secretary Clinton highlighting the small business owners who had been taken advantage of by Trump.

Donald Trump catapulted himself into national politics by pushing a racist conspiracy meant to delegitimize the first Black President of the United States.

Less than two weeks ago, he lied about the origin of that conspiracy theory, and falsely claimed he had put the issue to rest – when in reality, he had continued to push the conspiracy theory for years after the President produced his birth certificate.

Instead of apologizing, Trump doubled-down on the attack in front of the largest debate audience in U.S. history. It wasn’t just offensive – it was a huge strategic mistake.

#4: Attacking a beauty pageant contest winner for her weight & ethnicity

Trump was clearly rattled when Clinton brought up an incident where Trump had denigrated a Latina pageant winner by calling her “Miss Piggy,” and “Miss Housekeeping,” – a reference to her Venezuelan heritage.

They say that the worst thing in politics is to confirm voters’ worst suspicions about you, and that exchange reminded voters of Trump’s long history of sexist attacks on women and divisive attacks on Latinos.

Unable to control himself, Trump doubled-down on the attack this morning, telling Fox and Friends that, “she gained a massive amount of weight, and it was a real problem.”