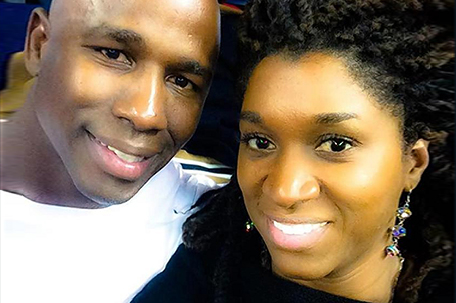 ABOVE PHOTO:  Undated photo of former Miami Dolphins linebacker Antonio Armstrong and wife Dawn. Their 16-year-old has been arrested in the shooting.

HOUSTON — A former Texas A&M and Miami Dolphins linebacker and his wife were fatally shot at their home in Houston. Their 16-year-old son has been charged with murder.

“This was an outstanding family. The male of the family was an absolute hard working breadwinner,” Houston police homicide Investigator Jimmy Dodson said. “He was an associate pastor in the area church. He’s a great guy. The mother was apparently a great mother, according to family members. Like I said, it was kind of the all-American family.”

There was no sign of forced entry into the home and no sign of a struggle in the bedroom where the couple was found, investigators said.

A motive for the shooting has not yet been released.

Dawn Armstrong died at the scene, and Antonio Armstrong was pronounced dead at Memorial Hermann Hospital hours later with a gunshot wound to the head.

Investigators who searched the southwest Houston home found a gun still smoking with a note next to it reading, “I’ve been watching you,” the TV station reported. Police arrested the 16-year-old boy. Sources close to the investigation said he was likely to be charged as an adult.

“There was no neglect or anything. There was nothing that even could possibly have justified this situation,” Dawn Armstrong’s cousin, Vaun Lee, told reporters. “This doesn’t even make sense. It makes no sense.”

The couple’s two other children were home but reportedly uninjured.

Antonio Armstrong was a letterman who played for the Aggies from 1991 to 1994. He was named first-team Associated Press All-America linebacker in 1994 and was drafted in the sixth round of the 1995 NFL Draft by the San Francisco 49ers. An ankle fracture in training camp led to his release that October.

He played for the Dolphins and Rams, then four seasons in the Canadian Football League, according to NBC Sports.