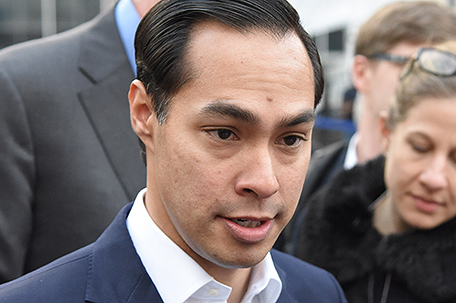 Former HUD Secretary Julian Castro has suspended his presidential campaign. The campaign issued the following statement to his supporters:

“I’m so proud of the campaign we’ve built together. We’ve accomplished so much together and made our mark on history.

We’ve stood up for the most vulnerable Americans — folks who are left out, cast aside, marginalized. We’ve fought for not only the middle class, but also the poor and those who are struggling the most.

We’ve put forward some of the most bold and comprehensive policy that rivals any candidate. We were the first to release policies on immigration, lead exposure, police violence, Indigenous communities, farmworkers, foster care, and hunger. And we set the pace on so many other important issues.

We traveled to communities not typically visited by presidential candidates to shine a light on important issues. We walked the storm drain tunnels beneath the Las Vegas strip where folks experiencing homelessness take shelter. We crossed the border to Matamoros, Mexico to see the effects of Trump’s immigration policy. We met with people living in a trailer park in Waukee, Iowa, after a corporate landlord jacked up their rent.

We’ve told the truth at a time when lies come easy out of the White House. We were the first to call for Trump’s impeachment. We said frankly from the debate stage that police violence IS gun violence. And we said that it’s time for a state other than Iowa or New Hampshire to vote first, so that our primaries reflect the diversity of our party and nation.

This campaign left our politics better than we found it—and that’s due in large part to you. You made phone calls, knocked doors, donated, and told your friends and family about our vision to put people first. I can’t thank you enough.

That’s why, it’s with a heavy heart and profound gratitude, that today I will suspend my campaign for President of the United States. With the Iowa caucuses just around the corner, and given the circumstances of this campaign season, I have determined that it simply isn’t our time.

I know this news hurts—but I’m not done fighting. I’m going to keep working to build an America where everyone counts, and where Democrats win races up and down the ballot.