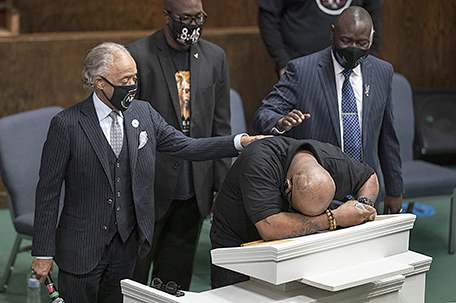 ABOVE PHOTO: Terrence Floyd, brother of George Floyd, speaks during a prayer service at Greater Friendship Missionary Church, as The Rev. Al Sharpton, left, his brother Philonise Floyd and attorney Ben Crump, right, place their hands on his back, Sunday, March 28, 2021, in Minneapolis. (Jerry Holt/Star Tribune via AP)

MINNEAPOLIS — A member of George Floyd’s family often occupies a reserved seat in the back corner of the Minneapolis courtroom where former police Officer Derek Chauvin is on trial in Floyd’s death. The seat reserved for Chauvin’s family goes unclaimed.

Floyd’s younger brother Philonise Floyd, of Houston, has attended several days of the trial to bear witness on behalf of his family. He has watched the often-excruciating bystander, police body camera and security videos of his brother’s fatal encounter with Chauvin on May 25, and listened to testimony from eyewitnesses and police.

“This is life-changing,” Philonise Floyd said during a break in the proceedings. “All this testimony is so hard on everyone.”

Chauvin, who is 45 and white, is charged with killing the 46-year-old Black man by pinning his neck for 9 minutes, 29 seconds as Floyd lay face-down in handcuffs. Floyd had been accused of passing a counterfeit $20 bill at a neighborhood market.

Nobody from Chauvin’s family has taken the seat they’re entitled to use. It usually has been occupied by a bailiff. Chauvin was recently divorced, and few details have emerged about the rest of his family. Courtroom seating has been strictly limited due to coronavirus concerns. Only two rotating pool reporters are allowed in at a time, but they’re able to observe what’s not on the official video feed, including the family and the jury.

Any additional Floyd family members present must watch from another room, and they’re getting support from outside the courtroom. While admission to the courthouse is strictly limited, civil rights attorney Benjamin Crump. who represents the Floyd family, and the Rev. Al Sharpton were seen there Tuesday morning with some members of the Floyd family, waiting for an elevator. Gwen Carr, the mother of the late Eric Garner, was with them. Sharpton, Crump and Carr held a prayer vigil with members of the family outside the courthouse during the midday break Tuesday.

Philonise Floyd told reporters he’s been trying to stop crying and has kept a box of tissues on the floor next to his chair. He said his family members and seemingly everyone he meets in Minneapolis can’t stop crying, either. But he said he’s grateful for the support his family is getting from the community, including the protesters who often gather outside the courthouse.

He was in the courtroom last week as George Floyd’s girlfriend, Courteney Ross, recounted both happy and sad times during their relationship — and their struggles with opiate addiction. He paid close attention, sometimes hanging his head as she recounted their life together, as part of prosecutors’ efforts to humanize George Floyd to the jury by portraying him as more than a crime statistic and giving a sympathetic explanation for his drug use.

At one point Philonise Floyd shook his head and turned his eyes away from the TV screen as it showed his brother laying unresponsive on a stretcher. But the jurors watched closely and stopped taking notes. A Black juror covered her mouth. Philonise Floyd rubbed the top of his head in distress as he lowered his head almost between his knees.

Rodney Floyd, George Floyd’s youngest brother, who also came up from Houston for the trial, heard tearful testimony last week from Charles McMillian, an older bystander who recognized Chauvin from the neighborhood. McMillian told the officer after an ambulance took Floyd away that he didn’t respect what Chauvin had done.

During a graphic video of officers struggling with George Floyd inside and then outside the squad car, yelling “Mama” and “I can’t breathe,” Rodney Floyd held his hands and looked down, shaking his head, refusing to watch. He later told a reporter in the hallway, through tears, that he did watch some of the video out of the corner of his eye.

He watched at least some of the other videos too. His jaw visibly clenched and his head shook as he heard his brother’s cries for help. But he turned his head as one video showed Chauvin’s knee on his brother’s neck.

Rodney Floyd watched as body camera video from Officer Thomas Lane showed Lane approach the SUV that George Floyd was driving. The video showed the officer ordering his brother to show his hands, then drawing his gun and using expletives as he demands that Floyd put his hands on the wheel. Rodney Floyd shook his head from side to side, as if to signal “no.” He glared briefly at Chauvin at one point. But he mostly endured the video, looking stoic and sad, hugging his midsection lightly and swiveling just a bit in his chair.

Subrina Montgomery, one of several relatives who lives in the Minneapolis area, attended a day of jury selection and told reporters she hadn’t learned that she was a cousin to Floyd until after his death. She said she wished she had known of the relationship so she could have met with him.

Shareeduh Tate, a Floyd cousin from Houston, who also attended a day of jury selection, told a reporter she had been encouraged by the often-emotional testimony from bystanders who pleaded with the officers to ease up.

“I could almost feel like I was living in that moment with them,” she said. “Countless times I myself have wished I had been able to intervene.”