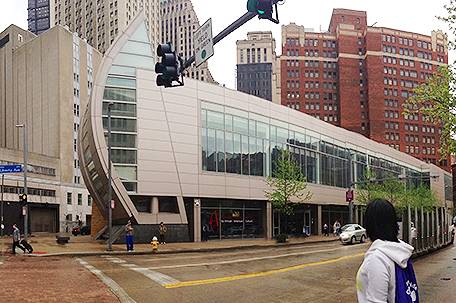 As conservator, Fitzgerald will oversee the center’s operation and have the authority to hire and fire staff, and can also make decisions involving booking events and shows without interference from the board.

And with one of her primary goals being to elicit new financial support from former donors, she will almost certainly move to replace the current board of trustees.

Fitzgerald is being paid a $25,000 retainer through Feb. 3 by mortgage holder Dollar Bank and will be assisted by the Meridian Group, a firm that specializes in corporate restructuring.

The bank will also forward “protective advances” to maintain the property, said its attorney Eric Schaffer, adding however that should Fitzgerald’s efforts fail, it retains its right to foreclose.

Dollar Bank began foreclosure proceedings in September after the center failed to make payments on an outstanding $7 million construction loan. Prior to that the 70 percent of its funding the center received from local foundations had slowed to a trickle.

Similarly, the Allegheny County Regional Asset District board, which funds artistic and cultural events using half of the 1-percent additional sales tax, also halted funding, and is holding the center’s $300,000 allotment for 2014 in escrow.

Shortly after the foreclosure filing, state Attorney General Kathleen Kane also began an audit of the center’s finances to determine the disposition of more than $17 million in public funds that went toward the $40 million center’s construction. Kane’s office also agreed to Fitzgerald’s appointment.

“Under the (court) order, she’s going to have the power to do what she needs to do,” he said.

Levine said the current board is willing to step aside once stakeholders vet a new board. RAD Executive Director David Donahoe said though he doesn’t know Fitzgerald, she seems to have the experience and expertise needed for the task.

“In terms of the (RAD board) we need a viable budget and business plan so that the center’s mission can be carried out,” he said. “When they submitted a budget in July they said they expected $1 million in foundation funding. A month later at the public hearing Interim President Oliver Byrd said that was unrealistic. And there is still no answer to the question of how they fill that hole.”

Founder and non-voting founding board member Sala Udin said he and the other founders are working to identify a new board. The state requires a minimum of three members, he said, but he would prefer a minimum of six.

“The current board could vote them on as members in one motion and resign with a second motion. Time is critical, we only have until Feb. 3,” said Udin. “Without the new board, the foundations won’t even return your phone call.”

Some of those contacted have already agreed to serve, he said, adding he hopes to be able to make the names public by the end of the week.