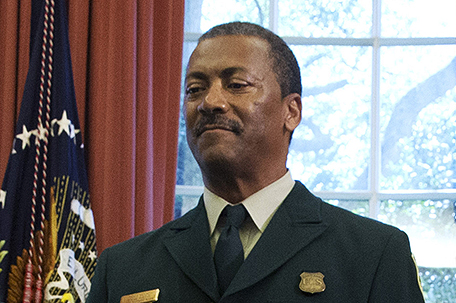 ABOVE PHOTO: In this July 10, 2015, file photo Randy Moore, of the U.S. Forest Service, listens as President Barack Obama talks about the designation of three new national monuments in the Oval Office of the White House in Washington. Veteran forester Randy Moore has been named chief of the U.S. Forest Service, the first African American to lead the agency in its 116-year history. (AP Photo/Jacquelyn Martin, File)

WASHINGTON — Veteran forester Randy Moore has been named chief of the U.S. Forest Service, the first African American to lead the agency in its 116-year history.

Moore, 66, replaces Vicki Christiansen, who has led the agency since 2018. The Forest Service, a division of the Agriculture Department, oversees 193 million acres of public lands in 154 national forests and 20 national grasslands.

Moore has served as regional forester in the California-based Pacific Southwest Region since 2007, where he has responsibility for 18 national forests in California and Hawaii.

He will take over from Christiansen as head of the 30,000-employee agency upon her retirement July 26. Christiansen and Moore will collaborate on what is already shaping up as a severe wildfire season in the West, where an epic drought, complicated by climate change, has made putting out fires more challenging and strained firefighting resources throughout the region.

In the Pacific Northwest, where an extended heat wave has triggered record-breaking temperatures in Oregon and Washington state, fire crews have been positioned in high-risk areas, and cities and counties have imposed burn bans.

Agriculture Secretary Tom Vilsack, who appointed Moore, called him “a catalyst for change and creativity” in carrying out the Forest Service’s mission to sustain the nation’s forests.

As a regional forester, Moore has been on the forefront of climate change, most notably leading the region’s response to the dramatic increase in catastrophic wildfires in California over the last decade, Vilsack said. “His proven track record of supporting and developing employees and putting communities at the center of the Forest Service’s work positions him well to lead the agency into the future at this critical time in our country,” Vilsack said in a statement.

“California understands all too well the challenges facing our forests and I’m glad a Californian will head efforts to tackle them,” she said.

Arkansas Rep. Bruce Westerman, the top Republican on the House Natural Resources Committee, called Moore “a seasoned professional,” adding: “I sincerely hope we can work together on mitigating catastrophic wildfires, opening up our national forests to sustainable lumber harvesting, making forests more resilient against insects and diseases and much more.”

Before heading the Pacific Southwest region, Moore was regional forester in the Wisconsin-based Eastern Region, where he oversaw forests in 20 states.

Moore started his federal career in 1978 at USDA’s Natural Resources Conservation Service in North Dakota. He has worked at national forests in Colorado, North Carolina and Missouri, a national grassland in Kansas and as an administrator in Washington.

Moore’s appointment comes as Congress and the Biden administration push to increase firefighter pay and convert at least 1,000 seasonal wildland firefighters to year-round workers as fires have grown more severe. President Joe Biden last week called for an increase in pay for federal firefighters, who start as low as $13 an hour.