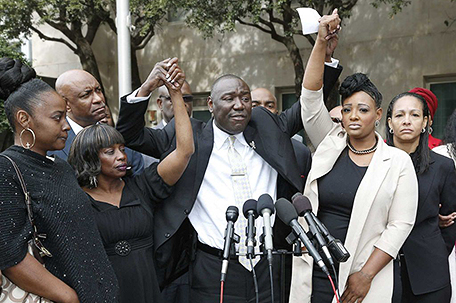 ABOVE PHOTO:  Attorney Benjamin Crump, center, holds up the arms of two of the accusers in the trial of Daniel Holtzclaw, Jannie Ligons, second from left, and Shardayreon Hill, second from right, during a news conference in Oklahoma City, Friday, Dec. 11, 2015. The AP does not identify victims of sex crimes without their consent, but is using Ligons’ and Hill’s names because they spoke publicly. Holtzclaw, a former Oklahoma City police officer, was convicted on 18 of 36 counts of sexual misconduct involving 13 women.  (AP Photo/Sue Ogrocki)

By Matt Sedensky and Sean Murphy

OKLAHOMA CITY — The rape convictions that could put a fired Oklahoma City police officer behind bars for life are vindication for some of the women he targeted, and also a reminder of how difficult it is to achieve justice in such cases.

Most victims never report sexual assaults, and those who accused ex-officer Daniel Holtzclaw were even more vulnerable as poor black women, many with checkered histories of crime and addiction.

A grandmother’s bravery in telling her story made all the difference this time. After Holtzclaw pulled her over, forced her to expose herself and perform oral sex on him, she filed a complaint that triggered a search for other victims.

“I didn’t do anything wrong,” the grandmother said Friday, showing her face on camera and revealing her name as Jannie Ligons, a daycare worker in her 50s. “So all I can say is, I was innocent and he just picked the wrong lady to stop that night.”

Holtzclaw was found guilty of sex crimes against eight women, and acquitted of charges involving five others he encountered on night patrol. Jurors recommended 263 years, including 30-year sentences for each of four first-degree rape convictions. 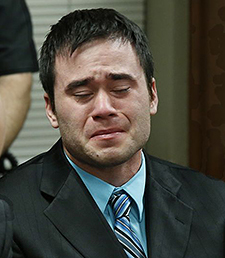 Daniel Holtzclaw cries as the verdicts are read in his trial in Oklahoma City, Thursday, Dec. 10, 2015. Holtzclaw, a former Oklahoma City police officer, was facing dozens of charges alleging he sexually assaulted 13 women while on duty. Holtzclaw was found guilty on a number of counts. (AP Photo/Sue Ogrocki, Pool)

Holtzclaw trembled and sobbed as his verdict was read Thursday night, on his 29th birthday. His emotional outburst prompted jail authorities to keep him on a 24-hour watch.

Though prosecutors assembled a damning case with GPS pinpoints, records of computer background checks and other evidence, some worried the all-white jury might doubt the testimony of his victims, all of whom are black. Holtzclaw is half-white, half-Japanese.

Crump was flanked by Ligons and Shardayreon Hill, who testified that Holtzclaw assaulted her while she was handcuffed to a hospital bed.

The AP does not identify victims of sex crimes without their consent, but these two women spoke publicly and agreed to be identified.

The verdict left the Rev. Al Sharpton “somewhere between jumping and shouting ‘Hallelujah’ and feeling aggrieved for the women.”

“If an all-white jury in Oklahoma City would convict a policeman of this amount of grievances, of charges, then it gives us hope that our marching and continued organizing is not in vain,” Sharpton said.

Oklahoma’s African-American community isn’t completely satisfied. The jury did not convict on Hill’s allegations, and her father, Tyral Muhammad, said Holtzclaw’s supervisors and others should have caught him sooner.

“We are not being rocked to sleep because of this verdict,” Muhammad said. “We want more black officers patrolling the northeast side of town.”

Most rapes go unpunished in America, and sex crime convictions are even more unlikely when law enforcement officers are accused, said Kimberly Lonsway, a research director at End Violence Against Women International.

This verdict is “remarkable,” she said. “The odds were completely against it.”

Just one-third of all rapes and sexual assaults were reported to police in 2014, lower than any other category of crime, according to the National Crime Victimization Survey by the Bureau of Justice Statistics. Only 40 percent of these led to an arrest or some other kind of closure, according to an FBI study of rapes reported in 2010.

Even when a reluctant victim comes forward and an arrest is made, prosecutors may decide they lack the evidence to win a conviction.

When they do go to trial, a courtroom win is never assured: 68 percent of rape cases adjudicated in the 75 largest U.S. counties in 2009 led to a conviction, according to the federal data. And even when convictions are won in cases where rape was the most serious charge, 11 percent don’t go to prison.

“It’s difficult all the way through the system,” said Scott Berkowitz, president of the Rape, Abuse and Incest National Network.

The “he said-she said” nature of such cases make them even more difficult when officers are accused. The very few who are tried in court can be portrayed as heroes, swaying juries.

Holtzclaw’s case was among those examined in an Associated Press investigation of sexual misconduct by law enforcement.

The AP’s yearlong probe revealed about 1,000 officers had lost their licenses for sex crimes or other sexual misconduct over a six-year period; many were never charged, let alone prosecuted.

“There’s a natural tendency to believe the officer,” said Joshua Marquis, the district attorney in Clatsop County, Oregon, who has prosecuted numerous cases against police, including some sexual offenses. “A lot of people have a hard time wrapping their head around the idea that they could ever do this.”

The accused officer typically has no criminal background, passionate supporters often show up in the gallery, and juries may believe an officer’s firing is punishment enough, Marquis said.

Meanwhile, their alleged victims often “are not sympathetic people” — they may have criminal records or don’t testify convincingly.

“That’s not an accident,” he said. “All kinds of sex offenders, particularly intelligent ones, they pick their victims because they know they’re less likely to be believed.”