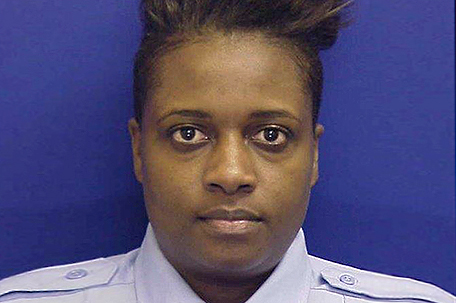 A firefighter hailed for her work ethic and the pride she took in being assigned to the city’s busiest engine companies died Tuesday after she became trapped in the basement of a burning row home where an elderly woman was later rescued, officials said.

Joyce Craig Lewis is the first female member of the Philadelphia Fire Department to die in the line of duty. She was part of a three-member hose team sent to attack the fire inside a home in the city’s West Oak Lane neighborhood at about 3 a.m. Tuesday, fire commissioner Derrick Sawyer said.

Commanders quickly changed tactics and ordered the company to withdraw as the fire intensified, with chimney-like conditions billowing smoke and heat toward firefighters, Sawyer said.

Craig Lewis, an 11-year veteran and mother of two, could not escape and issued a mayday call, officials said. Firefighters raced back inside and found the 36-year-old unconscious with no vital signs, Sawyer said.

Paramedics performed CPR and rushed her to a hospital. She was pronounced dead a short time later.

Mayor Michael Nutter called the death “a tremendous loss” and a “very sad day” for all Philadelphians.

A procession of fire vehicles led an ambulance with Craig Lewis’s body to the city medical examiner’s office. Black bunting was hung from firehouses.

Craig Lewis is survived by a 16-year-old son and a 16-month-old daughter, Nutter said.

The Philadelphia native was one of 58 women among the city’s 1,800 firefighters, according to firefighters union President Joe Schulle. She worked in Germantown and a busy North Philadelphia firehouse before requesting a transfer to Engine 64 in Lawncrest, one of the city’s most active fire stations. He said he believed she was working an overtime shift Tuesday morning.

“Everybody on that fire (scene) inevitably today is sitting at home reflecting, thinking what they could have done differently, how this could have been prevented,” Schulle said. “They’re heartbroken.”

However, he said the intense heat and deteriorating conditions may have made it nearly impossible to escape.

“If you are in a flashover, you have seconds — not minutes — to get out of there,” Schulle said.

Craig Lewis, a certified EMT, previously had been commended for attacking a fire while colleagues rescued residents from a burning home, Sawyer said. Her efforts Tuesday to keep the fire contained to the basement came as other firefighters rescued the elderly woman from another part of the home.

“She was just all-consumed by this job,” boyfriend Jason Anderson told The Philadelphia Inquirer. “That was her thing.”

Her equipment has been preserved for a pending investigation, Sawyer said.

More than 40 Philadelphia firefighters have been killed in the line of duty since 1943, according to the International Association of Fire Fighters. The last, Capt. Michael Goodwin, died April 6, 2013, in a roof collapse while battling a fire in the city’s Queen Village section.

Women account for relatively few firefighter deaths nationally — 29 of the 1,059 on-duty deaths recorded by the U.S. Fire Administration between 2003 and 2012 — in part because they are still vastly outnumbered by men on department rosters.

A memorial fund has been established for the children of  Craig-Lewis.

Checks can be made payable to the “Local 22-Joyce Craig-Lewis Memorial Fund” and mailed to 901 Arch Street, Philadelphia, PA 19107.

WPVI contributed to this story.