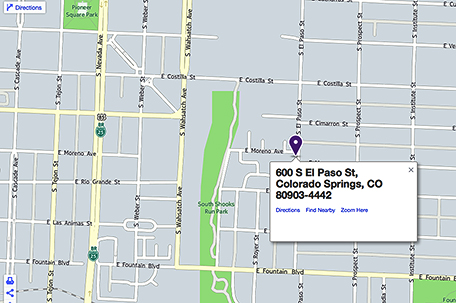 COLORADO SPRINGS, Colo. — Authorities are looking for a man who may have information about a homemade explosive that someone set off near the Colorado Springs chapter of the NAACP.

The blast happened Tuesday outside a barber shop that’s next door to the group’s office, which is about an hour south of Denver. There were no injuries and only minor damage, police said.

An improvised explosive device was detonated against the building, but it was too soon to know whether the nation’s oldest civil rights organization was the target, FBI spokeswoman Amy Sanders said. The agency sent members of its Joint Terrorism Task Force to help investigate. According to the the FBI, officials are seeking a “potential person of interest,” described as a balding white male, about 40 years old.

“He may be driving a 2000 or older model dirty, white pick-up truck with paneling, a dark colored bed liner, open tailgate, and a missing or covered license plate,” the FBI said in a statement said.

The explosion was heard near the building on the 600 block of South El Paso Street on the southern end of the city just before 11 a.m. Those nearby reported hearing a “loud boom.”

“I was cutting somebody’s hair and I heard the explosion,” said Gene Southerland, the owner of Mr. G’s Hair Design Studio in the same building. “It was such a loud explosion that some plastic containers fell off the shelf.”

Henry Allen Jr., the NAACP chapter president, told The Gazette the explosion was strong enough to knock items off the walls and that volunteers who looked outside to see what happened saw what they described as a gas can rigged with some kind of incendiary device, such as a flare.

“We’ll move on,” Allen told the newspaper. “This won’t deter us from doing the job we want to do in the community.”

Photos from the scene showed evidence markers littering the area surrounding the building, local police and their police bomb squad maneuvering around yellow tape. Residents living nearby said they heard a single, loud “boom” but saw no fire. One neighbor, Gregory Alan Johnson, said he was unaware of prior problems near the NAACP’s office. The organization shares the building with the barber shop, whose customers are predominantly black.

The organization’s national office issued a statement saying it was looking forward to a full and thorough investigation.

Anyone in the Colorado Springs area with information about the NAACP bombing, please call the Denver FBI tip line: 303-435-7787.

The Gazette contributed to this article.