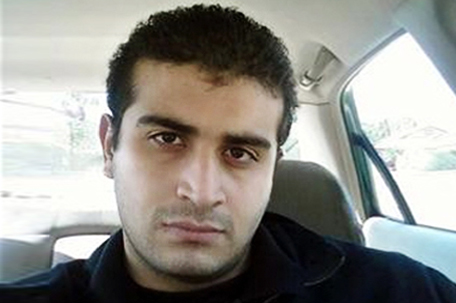 By Jason Dearen and Terrance Harris

ORLANDO, Fla. — The FBI is investigating reports that Orlando gunman Omar Mateen had been a regular at the gay nightclub he attacked and had used gay dating apps, a U.S. official briefed on the case said Tuesday.

A number of possible explanations and motives for the bloodbath that left 49 victims dead have emerged, with Mateen professing allegiance to the Islamic State group, his ex-wife saying he was mentally ill, and his father suggesting he was driven by hatred of gays.

The picture grew more complex as patrons of the Pulse came forward to say that they had seen the 29-year-old American-born Muslim there a number of times or that he had been using gay dating apps. Mateen had a wife and 3-year-old son.

Jim Van Horn, 71, said Mateen was a regular at the club. “He was trying to pick up people. Men,” Van Horn told The Associated Press. While acknowledging he didn’t know Mateen well, Van Horn said: “I think it’s possible that he was trying to deal with his inner demons, of trying to get rid of his anger of homosexuality.”

The official who said the FBI is looking into those reports was not authorized to discuss the investigation publicly and spoke on condition of anonymity.

Wielding an AR-15-style semi-automatic rifle and a handgun, Mateen opened fire at the club early Sunday in a three-hour shooting rampage and hostage siege that ended with a SWAT team killing him. It was the deadliest mass shooting in modern U.S. history. During the attack, he called 911 to profess allegiance to the Islamic State group.

Six of the more than 50 wounded were listed in critical condition Tuesday and five others were in guarded condition, Dr. Michael Cheatham of Orlando Regional Medical Center said at a hospital news conference in which doctors recalled victims arriving in “truckloads” and “ambulance-loads” the night of the rampage.

A choked-up Dr. Chadwick Smith described calling in additional staff members and telling them, “This is not a drill, this is not a joke.” He said everyone answered: “I’ll be right there.”

President Barack Obama visited Orlando on Thursday to pay his respects to the victims and stand in solidarity with the community, the White House said.

On Tuesday, Obama said investigators still have no information to suggest a foreign terrorist group directed the attack. He said it is increasingly clear that the killer “took in extremist information and propaganda over the internet. He appears to have been an angry, disturbed, unstable young man who became radicalized.”

The president also blasted Trump’s anti-Muslim rhetoric as dangerous and contrary to American values, challenged Congress to reinstate the assault weapons ban, and lashed out at his Republican foes who have criticized him for not using the term “radical Islam.”

“If someone seriously thinks we don’t know who we’re fighting, if there’s anyone out there who thinks we’re confused about who our enemies are,” Obama said, “that would come as a surprise to the thousands of terrorists we’ve taken off the battlefield.”

The Orlando Sentinel and other news organizations quoted other regulars from Pulse as saying they, too, had seen Mateen at the club repeatedly.

“Sometimes he would go over in the corner and sit and drink by himself, and other times he would get so drunk he was loud and belligerent,” Ty Smith told the Sentinel. He said he saw Mateen inside at least a dozen times.

Gay dating app Jack’d said it has been unable to confirm so far that Mateen had a profile on the site. Grindr officials said they “will continue to cooperate with the authorities and do not comment on ongoing investigations.” And Adam4Adam said the company is looking at conversations and profiles in the Orlando area for any activity by Mateen but hasn’t found anything yet.

Mateen’s ex-wife, Sitora Yusufiy, said earlier in the week that he was mentally ill, controlling and abusive. Amid the latest reports about his clubgoing, she told CNN: “Well, when we had gotten married, he confessed to me about his past that was recent at that time and that he very much enjoyed going to clubs and the nightlife and there was a lot of pictures of him.”

“I feel like it’s a side of him or a part of him that he lived but probably didn’t want everybody to know about,” she said.

Asked about reports that Mateen may have been in the club before, his father, Seddique Mateen, said from his home in Port St. Lucie, Florida, that his son may have been “scouting the place.” Asked if his son was gay, the Afghan immigrant replied: “No. No.”

He said that he was not aware of his son having any mental health problems and that he never saw any signs he had become radicalized. If he had seen anything differently, he said, “I would have called law enforcement immediately.”

The elder Mateen said that apart from the time his son got angry a few months ago over seeing two men kissing, he never saw any anti-gay behavior from him.

Over the past two years, the Islamic State has targeted gay men for death in keeping with its radical interpretation of Islam, throwing dozens of them from tall buildings in Iraq and Syria.

On Monday night, about a mile from Pulse in downtown Orlando, thousands gathered for a vigil to support the victims and survivors. The names of the dead were read aloud. It was held on the lawn of Orlando’s main performing arts venue, where mourners created a memorial of flowers, candles and notes for the victims.

Many said they felt compelled to attend because of the role Pulse played in their lives.

“It was a place that a young 20-year-old who wasn’t openly gay felt safe for the first time,” said Cathleen Daus, now 36, who worked at Pulse in her 20s. “Pulse gave me confidence, made me realize I was normal and so much like everyone else.”

On Monday, FBI Director James Comey said the FBI also was trying to determine whether Mateen had recently scouted Disney World as a potential target, as reported by People.com, which cited an unidentified federal law enforcement source.