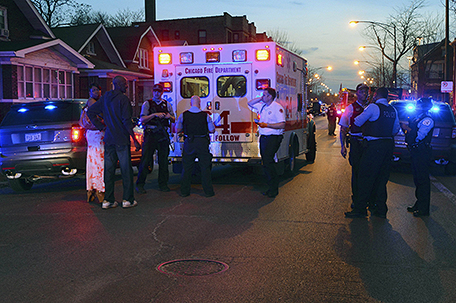 ABOVE PHOTO:  Chicago police and fire department personnel gather at the scene last weekend, where five children, all 15 years old or younger, were shot and wounded in Chicago. Police said Monday that eight people were killed and 44 injured, including the five children, in weekend shootings.  (AP Photo/Sun-Times Media, Brian Jackson)

CHICAGO — FBI Director James Comey said during a visit to Chicago on Monday that his agency would consider doing more to help stem street-level violence in the nation’s third largest city, though he stopped short of offering specifics.

Comey’s comments to reporters came after a particularly violent weekend in Chicago, where a 17-year-old girl and three other people were shot and killed between Friday afternoon and Sunday night on Chicago’s South and West sides. More than 30 others were also wounded.

In remarks before fielding questions at the news conference, Comey listed counter-terrorism, home-grown extremism and cybercrime as some of the FBI’s top priorities. Asked later how high a priority reducing Chicago violence was, he responded, “Very high.”

Flanking him was Chicago Police Superintendent Garry McCarthy, though the city’s top cop didn’t speak during the event at the agency’s Chicago office. During Comey’s visit, which was planned well before the weekend shootings, he met with McCarthy, and state and federal officials.

Mayor Rahm Emanuel, Illinois’ two U.S. senators and others have been pressing for more than a year for the FBI, U.S. attorney’s office and other federal law enforcement agencies to do more to combat the persistent violence, which claims hundreds of lives each year.

The Chicago Sun-Times reports Mayor Emanuel spoke passionately against gun violence Monday night after eight people were killed and nearly 40 — including a number of children — were wounded in weekend gunfire.

“These are our children. They’re full of hope and optimism,” Emanuel told a crowd gathered in the gymnasium next to St. Sabina Church, 1210 W. 78th Place. “The worst thing that should happen is that you fall off your bike, you get a knee scraped. Kids are immune now to the sound of gunfire.”

Emanuel made his comments flanked by family members of people killed by gunfire, several of whom he personally phoned after the deaths to express condolences.

“I am done making these phone calls. I have no words to say anymore,” he said before a slew of TV cameras, including one from CNN.

“Yes it’s going to get warm, but values are not about seasons,” Emanuel said, addressing the rash of violence that has accompanied warmer weather. “They don’t come only in the summer. The values that we teach our children when we hold them and read to them are timeless. They’re about right and wrong. They’re about knowing good from bad. They serve as your compass as your guide.”

Comey said the FBI already devotes major resources to fighting gang- and drug-related violence in the city, saying around 100 agents are specifically assigned to violent-crime cases. But he said he talked to McCarthy and other officials about what more the agency could do.

“I asked them, please, think about ways we can make additional contributions,” Comey said. “I don’t know what that might be. But if there is, I want to do that.”

One 15-year-old was not surprised at all.

“Honestly, I was kinda expecting it,” former gang member Martique Taylor told Wall. “Like it was a hot weekend, all the violence, like basically boiling up, so I knew what was going to happen.”

The police superintendent attributed some of this weekend’s shootings to gang retaliation on the one year anniversary of another shooting.

“A lot of people retaliate off, cause one of their loved ones, or one of their close friends got hurt and them knowing people that they was so called into it with, they, basically about a lick-back attack, or attacks,” he said. “That’s how a lot of things go on the street, people just want their lick-back.”