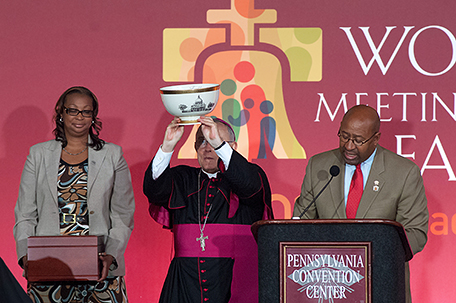 ABOVE PHOTO: Opening ceremonies for the World Meeting of Families were led by Archbishop Charles Chaput and Mayor Michael Nutter.  (Photo by Bill Z. Foster)

For the pilgrims at the World Meeting of Families,  finding ways to better connect home and church is the name of the game.

To get to Philadelphia from Mozambique, an African country along the Indian Ocean, takes 24 hours by plane.

Selma Vilanculo knows this because it is the journey that she and 48 of her fellow pilgrims took to get to the World Meeting of Families, which officially began on Tuesday.

After an opening ceremony that featured pomp, circumstance and lots of great music, Vilanculo talked about her journey and how excited she was to be attending her first World Meeting of Families.

But while the chance to see Pope Francis preside over a series of masses this weekend and to interact with people from around the world was exciting to her, Vianculo was more interested in getting some information on how to improve the relationship between two entities she cares a lot about: her church and her family. 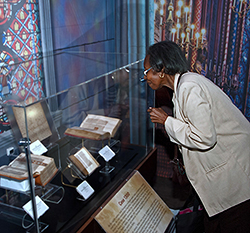 A visitor looks at the artifacts from the Museum of the Bible. (Photo by Bill Z. Foster)

“I hope that I get information on how to strengthen the relationship between the church and the family,” she said. “There are too many things going on with the family these days.”

In an opening ceremony that featured bell ringers, a children’s choir and a gospel choir to stir the spirits of attendees, the World Meeting of Families began a week dedicated to working on one the relationship that the Catholic Church finds among its most important.

Every three years, the Church hosts the World Meeting of Families, which is sponsored by the Holy See’s Pontifical Council for the Family. This is the first year that the gathering has been held on American soil and over 17,000 people were expected to attend, making this the largest crowd in the event’s history, said Donna Farrell, WMOF’s Executive Director.

“Looking out at this joyous crowd, a truly global group of pilgrims, representing more than 100 countries, comes to our city,” she said. “It’s exciting, but it’s also moving to see so many people from all over the world have come together in unity, celebrating family as the sanctuary of love and life.”

During the opening ceremonies, the crowd heard from Archbishop Charles Chaput, leader of the Archdiocese of Philadelphia, and S.E. Monsignor Vincenzo Paglia, president of the Pontifical Council on the Family.

Mayor Michael Nutter was also on hand, presiding over one of the last events he will oversee as Mayor. After praising the Catholic institutions that made him what he is today, he presented a pair of gifts that will be going to Pope Francis once he arrives in Philadelphia on Friday: an ivory, bone china bowl with 14-karat gold trim and paintings of St. Peter’s Basilica in Vatican City and Independence Mall from Lenox, and a custom made, Breezer Downtown 8 bicycle with a custom paint job and chain cover.

“It’s a people’s bike for the people’s Pope,” Nutter said. Breezer will also be donating 100 bicycles to bicycle-based community programs in honor of the gift to the Pontiff.

The Meeting unofficially began on Monday with a two-night revival meeting sponsored by the Archdiocese of Philadelphia’s Office of Black Catholics at the Church of the Jesu.

There was also a luncheon unveiling plans for the Museum of the Bible’s new Washington, D.C. home, which will open in November 2017. The museum also brought the exhibition “Verbum Domini II: God’s Word Goes Out To The Nations” for WMOF participants to view. This exhibit was first displayed at the Vatican.

But while there will be loads of workshops on strengthening families, masses celebrating the ties between families and the church, and a host of other activities, Pope Francis’s appearances looked to be the highlight of the Meeting. The Pontiff will be only the fourth Pope to visit the United States.