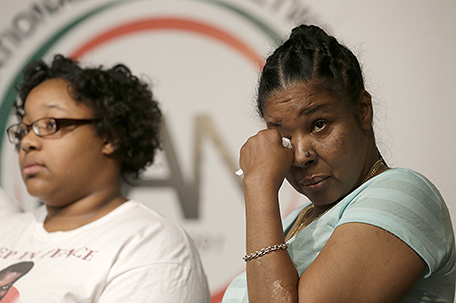 ABOVE PHOTO:  Eric Garner’s wife Esaw, right, wipes a tear from her eye as she stands with daughter Emerald Snipes during a news conference, Tuesday, July 14, 2015, in New York. The family of Garner, a black man who died after being placed in a white police officer’s chokehold, discussed the $5.9 million settlement it reached with the city days before the anniversary of his death. (AP Photo/Mary Altaffer)

NEW YORK — The relatives of an unarmed black man who died after being put in a white police officer’s chokehold said Tuesday that the nearly $6 million settlement they reached with the city wasn’t a victory as they continued pressing for federal civil rights charges.

“The victory will come when we get justice,” Eric Garner’s mother, Gwen Carr, said a day after the $5.9 million settlement was announced.

“Justice,” added one of Garner’s children, Emerald Snipes, “is when somebody is held accountable for what they do.”

The settlement came nearly a year after the 43-year-old Garner died, having repeatedly pleaded “I can’t breathe!” as Officer Daniel Pantaleo the officer took him to the ground with an arm around his neck. Garner lost consciousness and was pronounced dead later at a hospital.

He had refused to be handcuffed after being stopped on suspicion of selling loose, untaxed cigarettes on a Staten Island street.

The encounter, caught on an onlooker’s video, spurred protests. Coupled with other police killings of unarmed black men elsewhere in recent months, Garner’s death became a flashpoint in a national debate about relations between police and minority communities.

“`I can’t breathe’ spurred the national movement,” and it won’t end “until we change how policing goes,” the Rev. Al Sharpton said at a news conference Tuesday with Garner’s relatives.

The city medical examiner found the police chokehold contributed to Garner’s death. But Pantaleo’s lawyer said the officer had used a permissible takedown maneuver known as a seatbelt – not a chokehold, banned under New York Police Department policy.

A grand jury declined to indict Pantaleo. The U.S. Justice Department and the U.S. attorney’s office in Brooklyn are investigating whether there’s evidence to warrant charges that the officer deliberately violated Garner’s civil rights. Such cases are rare after grand jury inaction or acquittal at state level.

The settlement came before any lawsuit was filed, though the family had filed notice of its intention to sue. Comptroller Scott Stringer has made a point of settling some civil rights cases before lawsuits begin, saying resolving them quickly saves the city money on legal fees.

“Following a judicious review of the claim and facts of this case, my office was able to reach a settlement with the estate of Eric Garner that is in the best interests of all parties,” Stringer said Monday.

The city did not admit any liability.

Mayor Bill de Blasio said he hopes Garner’s family “can find some peace and finality” from the settlement. He was scheduled to speak Tuesday at a church memorial service in Garner’s honor.

Longtime civil rights attorney Jonathan Moore, the family’s lawyer, said there also was a settlement with the Richmond University Medical Center whose employees treated Garner. That settlement is confidential.