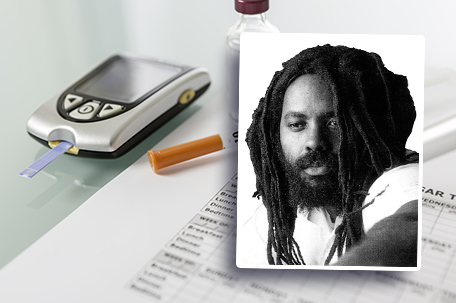 POTTSVILLE, Pa.  — Former death row inmate Mumia Abu-Jamal was rushed to a hospital to be treated for complications from diabetes, according to family members and supporters who asserted Tuesday that the state prison system has been providing him with substandard medical care.

Abu-Jamal’s blood sugar was dangerously high when he arrived at Schuylkill Medical Center on Monday, and he could have slipped into a diabetic coma, relatives and supporters said at a news conference outside the hospital, where he remained under heavy guard.

Abu-Jamal, 60, is a former Black Panther serving life in prison for the 1981 murder of white Philadelphia Officer Daniel Faulkner. His conviction was upheld through years of appeals, but he has gained international support for his claim that he’s the victim of a racist justice system. A federal appeals court threw out his death sentence in 2008, citing flawed jury instructions.

Two guards are posted outside Abu-Jamal’s hospital room, and two others are stationed inside, according to his wife. She said Abu-Jamal was handcuffed to a chair during her half-hour visit Tuesday, and she fed him ice chips.

Advocates claimed that state prison officials failed to provide Abu-Jamal with proper medical care, saying he had no idea he was diabetic until he was taken to the hospital.

They said he had been in the prison infirmary recently for treatment of a severe skin condition and underwent several blood tests that should have detected his diabetes.

“The situation Mumia was in yesterday morning was a near-death experience,” said Johanna Fernandez, an Abu-Jamal supporter and history professor at Baruch College. “So we want to know: How is it that the prison system allowed this condition to deteriorate in such a way?”

Asked to respond, Susan McNaughton, a spokeswoman for the state Department of Corrections said: “When an inmate presents to the medical department with signs and symptoms of a serious illness, he/she is appropriately and immediately sent to the hospital for care.”

Amnesty International has maintained that Abu-Jamal’s trial was “manifestly unfair” and failed to meet international fair trial standards. His writings and radio broadcasts from death row put him at the center of an international debate over capital punishment and made him the subject of books and movies.