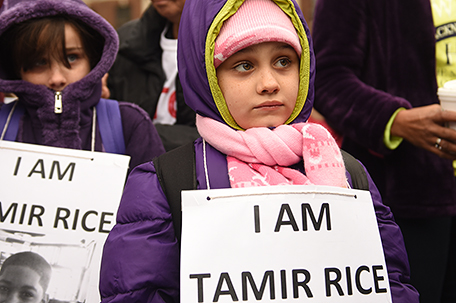 ABOVE PHOTO:  Stop Mass Incarcerations Network sponsored a children’s march on the one year anniversary of Tamir Rice’s death at the hands of the Cleveland police.  (a katz / Shutterstock.com)

CLEVELAND — Nearly 400 days after a white police officer fatally shot a black 12-year-old carrying a pellet gun in an encounter captured on surveillance video, the boy’s disillusioned family believes it’s unlikely anyone will be indicted.

A decision on whether to charge the officer or his partner in the death of Tamir Rice — one of the higher-profile cases of black deaths at the hands of police that have roiled cities nationwide — could come any day. The grand jury making the decision has been meeting since mid-October.

The video shows patrolman Timothy Loehmann, a rookie at the time, shooting Tamir in an instant as the cruiser driven by patrolman Frank Garmback skids to a stop on Nov. 22, 2014. Tamir died the next day during surgery, and his family has repeatedly questioned why the case has dragged on.

Subodh Chandra, a Cleveland attorney who represents the Rice family in a federal civil rights lawsuit over the shooting, said he has resigned himself to the belief that the officers, both white, won’t be indicted.

“This is apparently how long it takes to engineer denying justice to a family when the video of the incident clearly illustrates probable cause to charge the officer,” Chandra said.

Unlike criminal trials, in which prosecutors must prove guilt beyond a reasonable doubt for a conviction, the burden of proof for an indictment is much lower. The grand jury would have to decide only that a crime might have been committed to indict the officers.

Activists used an obscure state law in June to petition a Cleveland judge to charge the officers. The judge ruled there was probable cause to charge Loehmann with murder and Garmback with reckless homicide based on the video, but he said the decision on criminal charges should be left to prosecutors.

The lead agency investigation the shooting, the Cuyahoga County Sheriff’s Office, turned over its findings in June to county prosecutor Tim McGinty.

Investigations and grand jury decisions in other high-profile deaths have come much faster. It took about three months from the time Michael Brown was fatally shot in Ferguson, Missouri, for a grand jury to decide against charges. A grand jury indicted six police officers in Baltimore three weeks after the death of Freddie Gray while in police custody.

McGinty spokesman Joe Frolik attributed the lengthy investigation in Tamir’s case to the office being “careful and thorough.”

Grand jury proceedings are supposed to be secret, but McGinty has released expert reports and investigative documents to the media and public while citing his desire for transparency in how the case is being handled.

On the day Tamir was shot, a man drinking a beer and waiting for a bus outside a recreation center called 911 to report that a man was waving a gun and pointing it at people. Tamir lived across the street from the recreation center and went there to play nearly every day.

The man told the 911 call taker that the holder of the gun was likely a juvenile and that the gun probably wasn’t real. The call taker never passed that information to the dispatcher who gave Loehmann and Garmback the high-priority call.

When the cruiser arrived, the vehicle skidded on wet grass and stopped within feet of the boy. Authorities say Loehmann shot Tamir less than two seconds after opening the cruiser door.

The officers said they repeatedly yelled at Tamir to put his hands up, although investigators found no evidence of that. Garmback said the windows of the cruiser were rolled up.

In the video, Tamir walks toward the cruiser as it moves toward him. It’s unclear even in an enhanced version of the video whether Tamir was reaching for the gun or had his hand on it when Loehmann shot him.

The boy lay unattended for about four minutes until an FBI agent who is a trained paramedic arrived and began administering first aid.

Tamir was carrying a plastic airsoft gun that shoots nonlethal plastic projectiles and is a replica of an actual firearm. He had borrowed it that morning from a friend who warned him to be careful because the gun looked real.

McGinty has said prosecutors will make a recommendation to the grand jury on charges before the panel votes.

If Loehmann feared for his life, the shooting was reasonable and justified, said Maria Haberfeld, a professor at the John Jay College of Criminal Justice in New York who isn’t involved in the case.

“Police officers are not obligated to figure out what’s going on in someone’s mind when they have a gun,” she said. “He’s arriving to the scene in fear for his life. This might be his or her last response call.”

Update: No indictments, but prosecutors cite mistakes in boy’s death

CLEVELAND — A grand jury declined to indict two white Cleveland police officers in the fatal shooting of Tamir Rice, a 12-year-old black boy who had a pellet gun. But prosecutors say plenty of mistakes were made that led to the tragedy. Among them, they say, were:

– Someone had removed an orange tip to the gun that would have identified it as a toy. The gun’s owner had warned Tamir about playing with it because of the possibility it could be mistaken for a real one.

– No one intervened despite Tamir wielding the toy gun for at least two hours, drawing it from his waistband and pointing it at other people at a recreation center before police were called.

– Dispatchers failed to relay to officers that the person scaring people at the recreation center likely was a ju venile with a toy gun. Officers thought they were confronting an adult. Tamir, at 5-foot-7 and 175 pounds, could pass for a grown-up.

– Officer Frank Garmback, upon arriving at the rec center, stopped the police cruiser, as it skidded on wet, slippery pavement, no more than 10 feet from Tamir. The close proximity heightened the tension when the boy turned to approach the cruiser while drawing the gun from his waistband, leading Officer Timothy Loehmann to fire two shots at him. Tamir died later at a hospital.

Simple ways to safely bring joy to seniors during the holidays

Tweet Share Pin Email BPT Many seniors and their loved ones are taking special precautions to stay...

SUNscopes for the week of November 29