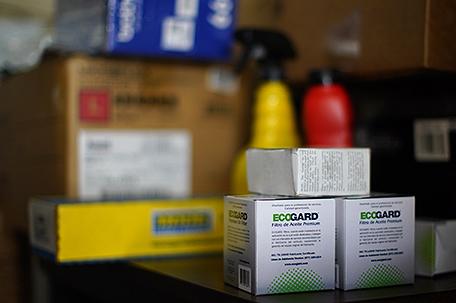 ABOVE PHOTO: Auto parts are displayed on a shelf at a car repair shop, Wednesday, July 13, 2022, in Collingdale, Pa. Surging prices for gas, food and rent catapulted U.S. inflation to a new four-decade peak in June, further pressuring households and likely sealing the case for another large interest rate hike by the Federal Reserve, with higher borrowing costs to follow. Consumer prices soared 9.1% compared with a year earlier, the government said Wednesday, July 13, 2022, the biggest 12-month increase since 1981, and up from an 8.6% jump in May. (AP Photo/Matt Slocum)

For the 12 months ending in June, the government’s consumer price index rocketed 9.1%, the fastest year-over-year jump since 1981.

And that was nothing next to what energy prices did: Fueled by heavy demand and by Russia’s invasion of Ukraine, energy costs shot up nearly 42% in the past 12 months, the largest such jump since 1980.

Even if you toss out food and energy prices — which are notoriously volatile and have driven much of the price spike — so-called core inflation soared 5.9% over the past year.

Consumers have endured the pain in everyday routines. Unleaded gasoline is up 61% in the past year. Men’s suits, jackets and coats, 25%, Airline tickets, 34%. Eggs 33%. Breakfast sausage, 14%.

Under Chair Jerome Powell, the Federal Reserve never anticipated inflation this severe or persistent. Yet after having been merely an afterthought for decades, high inflation reasserted itself with ferocious speed as shortages of labor and supplies ran up against a propulsive rise in demand for goods and services across the economy.

In February 2021, the consumer price index was running just 1.7% above its level a year earlier. From there, it accelerated — past 2% in March, past 4% in April and 5% in May. By December, consumer prices hit the 7% year-over-year barrier. And on and on it went: 7.5% in January, 7.9% in February. And the increases have topped 8% every month since March.

The United States has endured worse inflation before, but not in many decades. The post-World War II inflation peak reached nearly 20% in 1947, a result of the lifting of wartime price curbs, supply shortages and pent-up consumer demand. The inflation of the 1970s and early 1980s peaked at 14.8% in March 1980 before the Fed exorcized high prices with aggressive rate hikes that caused brutal back-to-back recessions in 1980 and 1981-1982.

For months, Powell and some others characterized high inflation as merely a “transitory” phenomenon while the economy rebounded from the pandemic recession faster than anyone had anticipated. No longer. Now, most economists expect inflation to remain painfully elevated well after this year, with demand outstripping supplies in numerous areas of the economy.

So the Fed has radically changed course by imposing a succession of large rate hikes. The central bank is making a high-risk bet that it can slow the economy enough to rein in inflation without weakening it so much as to trigger a recession.

The overall economy looks healthy for now, with a robust job market and extremely low unemployment. But many economists warn that the Fed’s steady credit tightening will likely cause a downturn.

WHAT’S CAUSED THE SPIKE IN INFLATION?

Good news — mostly. When the pandemic paralyzed the economy in the spring of 2020 and lockdowns kicked in, businesses closed or cut hours and consumers stayed home as a health precaution, employers slashed a breathtaking 22 million jobs. Economic output plunged at a record-shattering 31% annual rate in 2020’s April-June quarter.

But instead of sinking into a prolonged downturn, the economy staged an unexpectedly rousing recovery, fueled by vast infusions of government aid and emergency intervention by the Fed, which slashed rates among other things. By spring of last year, the rollout of vaccines had emboldened consumers to return to restaurants, bars, shops, airports and entertainment venues.

With demand up and supplies down, costs jumped. And companies found that they could pass along those higher costs in the form of higher prices to consumers, many of whom had managed to pile up savings during the pandemic.

Critics blamed, in part, President Joe Biden’s $1.9 trillion coronavirus relief package, with its $1,400 checks to most households, for overheating an economy that was already sizzling on its own. Many others assigned a greater blame to supply shortages. And some argued that the Fed kept rates near zero far too long, lending fuel to runaway spending and inflated prices in stocks, homes and other assets.

Not by a long shot. Prices are rising just about everywhere in the world, in part a consequence of Russia’s invasion of Ukraine, which has elevated energy and food prices, and in part because of the supply chain bottlenecks that have driven U.S. prices up.

Eurostat, the statistical service of the European Union, says it expects year-over-year inflation to hit 8.6% last month from a year earlier in the 19 countries that share the euro currency, and up from an annual increase of 8.1% in May.

The International Monetary Fund has forecast that consumer prices in the world’s advanced economies will jump 5.7% this year, the most since 1984. The IMF foresees 8.7% inflation in poorer emerging market and developing countries, the highest such rate since 2008.

HOW LONG WILL IT LAST?

No one knows for sure. Elevated consumer price inflation could endure as long as companies struggle to keep up with consumers’ demand for goods and services. A recovering job market — employers added a record 6.7 million jobs last year and a healthy average of 457,000 a month so far this year — means that Americans as a whole can afford to keep spending.

The Fed foresees inflation staying above its 2% annual target into 2024. But relief from higher prices might be coming. Oil prices have been tumbling on fears of an economic downturn. Jammed-up supply chains are showing some signs of improvement, at least in industries like transportation. Commodity prices have begun to fall. Pay increases have slowed. And surveys show that Americans’ expectations for inflation over the long run have eased — a trend that often points to more moderate price increases over time.

What’s more, the Fed’s pivot toward an aggressively anti-inflationary policy could eventually reduce consumer demand. Inflation itself is eroding purchasing power and might force some consumers to shave spending.

At the same time, new COVID variants could cloud the outlook — either by causing outbreaks that force factories and ports to close and further disrupt supply chains or by keeping more people home and reducing demand for goods.

HOW ARE HIGHER PRICES AFFECTING CONSUMERS?

The strong job market is boosting workers’ pay, though not enough to offset higher prices. The Labor Department says that after accounting for higher consumer prices, hourly earnings for private-sector employees fell 3.6% last month from a year earlier, the 15th straight drop.

There are exceptions: After-inflation wages rose more than 4% for hotel workers and 3% for those working in bars.

Biden focuses on workers as high inflation remains a risk