EXPLAINER: How the Arbery trial got a nearly all-white jury 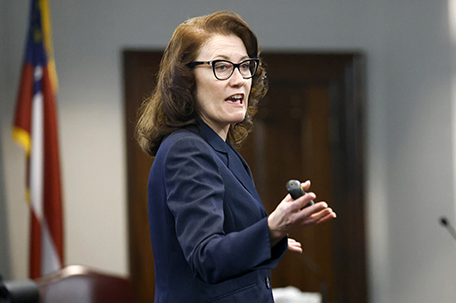 ABOVE PHOTO: Prosecutor Linda Dunikoski speaks during opening statements in the trial of Greg McMichael and his son, Travis McMichael, and a neighbor, William “Roddie” Bryan at the Glynn County Courthouse, Friday, Nov. 5, 2021, in Brunswick, Ga. The three are charged with the February 2020 slaying of 25-year-old Ahmaud Arbery. (Octavio Jones/Pool Photo via AP)

The long-standing practice of allowing attorneys to dismiss prospective jurors without giving a reason has come under intense criticism after a nearly all-white jury was picked to decide whether three white men are guilty of murder for shooting and killing Ahmaud Arbery, a Black man who was jogging though a neighborhood in Georgia.

The selection of 11 white jurors and one Black man to decide the fate of the three defendants has drawn complaints from prosecutors and the victim’s family that the jury selection process was blatantly unfair.

Even the judge in the case agreed with prosecutors that the exclusion of Black potential jurors looked like intentional discrimination. Still, the judge said he had limited authority to intervene after defense attorneys gave reasons that were not about race for cutting jurors.

The trial has brought new attention to a debate and growing movement around the U.S. to do away “peremptory challenges,” which allow lawyers to summarily dismiss jurors. Critics say the practice is fraught with biases and creates racially imbalanced juries that make it harder to bring equal justice.

HOW DO STRIKES WORK?

During jury selection, the defense and prosecution each get a certain number of peremptory challenges, or strikes, that lets them dismiss potential jurors without explanation.

Lawyers can also ask to remove a prospective juror for cause if they believe that person is biased or lacks the ability to serve, though they must explain the potential bias.

Still, the U.S. Supreme Court has ruled that peremptory strikes cannot be used to dismiss jurors based solely on their race. If a judge allows a challenge to a peremptory strike, the attorney who wants to remove a juror must offer a “race-neutral” reason for doing so.

But critics say lawyers can get away with abusing peremptory challenges as long as they provide a reason that is not about race. They also say a 1986 U.S. Supreme Court decision governing the practice has failed to end discrimination in trials.

Around the country, courts are beginning to change the rules to prevent the unfair exclusion of prospective jurors based on race or ethnicity.

The Washington Supreme Court did so in 2018, saying judges don’t have to find purposeful discrimination to deny a peremptory challenge, and that challenges based on “implicit, institutional, and unconscious biases” can be rejected.

The court also said certain justifications for removing prospective jurors — distrust in the legal system and knowing someone who has been convicted of a crime — are invalid.

In 2020, California adopted a similar set of invalid justifications for peremptory strikes. The rule changes will begin to apply at criminal trials next year and in 2026 for civil trials.

The two state Court of Appeals judge who proposed the change said it was “a clear opportunity to end definitively one of the most obvious sources of racial injustice in the courts.”

In Arizona, Pima County Public Defender Joel Feinman said he hasn’t seen prosecutors in his jurisdiction use peremptory challenges in a racist way but recognizes that the practice has led to racially lopsided juries in other communities.

While the elimination of peremptory challenges will help prevent racial disparities in trials, Feinman said the move also carries a drawback: It will make it harder to keep people who are hiding their biases — such as a strong support for law enforcement — off a jury.