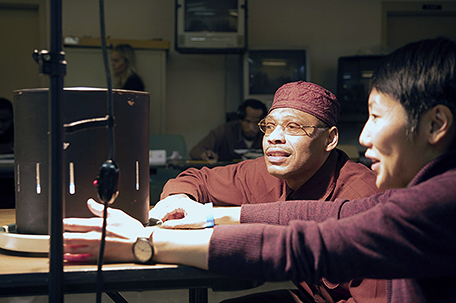 Ezra has been locked up for about 45 years. In that time, he’s taken the opportunities he’s been given in prison, grown from them and feels like he’s turned his life around.

He heard about a program at the Chester State Correctional Institution, a medium-security prison for men near Philadelphia, where he could learn animation and create a short film based on his life experiences. He saw it as a chance to send a message, both to people on the outside and to other men inside.

Entitled “The Phoenix,” his minute-and-a-half-long film depicts what he calls his metamorphosis, from the streets and wrong turns to his transformation in prison.

“We’re locked in, but the community is also locked out. This is one way for us to get out to the community,” Ezra said on a recent morning from a side room in the prison’s chapel. “I thought it would be a powerful message, that we can be transformed and we can be a part of society.”

It is one of 20 short films created by currently incarcerated men and women for the exhibit “Hidden Lives Illuminated,” on display through Sept. 12 at Eastern State Penitentiary. The films are being projected onto the exterior walls of the Gothic former prison-turned-museum, and offer a glimpse into the lives of these inmates to passersby and museum visitors alike.

Sean Kelley, the director of interpretation at Eastern State Penitentiary, got the idea for the project after seeing a similar exhibit in Chicago called “Freedom/Time” and secured a $297,000 grant from the Pew Center for Arts & Heritage to bring it to fruition. All he needed were filmmakers.

“Prisons are some of the most inaccessible spaces in America,” Kelley said. “We wanted viewers to be able [to] hear the voices of people from the other side of those prison walls.”

About a year ago, Kelley spoke about the animation project in the auditorium of SCI Chester. About 100 men applied, and 20 were selected (one filmmaker was released before finishing his project). Over the course of about nine months, the men at the Chester prison and women at the Riverside Correctional Facility took what amounted to two semesters of a college-level film production class. They learned pre-production, scripting, storyboarding and finally, animation.

“As one of the artists says, ‘The hardest parts of teaching in prison is prison,’” Kelley said.

All class materials had to be screened two weeks in advance, so there was a lot of pre-planning, said instructor Erika Tsuchiya-Bergere. There was no access to the internet or computers, so all classes were taught the old-fashioned way: on a white board, with photocopies and using pencil and paper. They had to do all their cutouts without scissors, using table edges and plastic rulers instead. It was a lot of work, much of it tedious at the start. Tsuchiya-Bergere said she was amazed by how much work the inmates put in, and how much they learned.

The filmmakers have been able to get feedback from the audience via postcards viewers can fill out.

“People don’t often learn or think about the added difficulty of illness when incarcerated” a viewer named Jade wrote in a postcard. She’d viewed the film “Lymph Notes,” which describes battling cancer in prison .

“Not having someone to physically comfort you through the process has to be difficult,” Jade wrote. “Your story will stick with me and makes us all think critically about the human experience.”

The subject matter can be heavy: one is a tribute to an inmate’s young niece who died of leukemia while he was incarcerated. Many focus on regrets and missing family.

Robert’s film , “A Special Person,” is a love letter to his 10-year-old son, and he’ll be released in time to view the film together at the exhibit’s finale on Sept. 12.

He said the process of telling this personal story taught him the value of opening up and making himself vulnerable.

“Now I’m opening up to people all over the world. It’s my way to give back,” he said. “I want people to know I’m not the mistakes I’ve made. I’m better than that.”

For filmmaker Donyea, he felt like the chance to create the film was such an important opportunity and it gave him a lot of stress to make sure he sent the message he envisioned.

His short called “Big Boy Shoes” depicts how the decisions he made in his life ended up taking control of his life. At the end the viewer is presented with an image of a road, symbolizing the choices that lay ahead.

“It’s not how you start, or what happens in the middle, it’s how you end,” he said.

For family members on the outside, viewing the films has been cathartic.

Justino’s film, “Piano Priest,” honors his son, a talented musician. His wife, Sharon Griggs, said seeing the film was extremely moving for both her and her teenage son.

“When the film came on and I heard my husband’s voice, I began to weep,” she said. “It was so poetic and profound to see the adoration that he has for his son.”

It’s also a reminder to family members “that their loved ones aren’t monsters or just a number. There’s hope and opportunity for change,” she said.