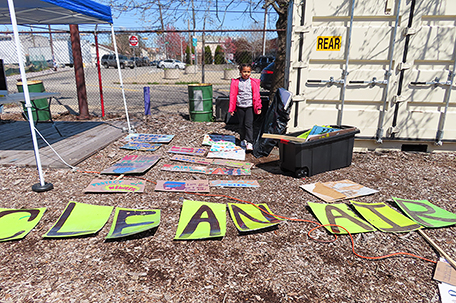 ABOVE PHOTO: Eight-year-old Sapphire Tate arranges signs before a protest against a proposed backup power plant for a sewage treatment facility in Newark N.J. on April 20, 2022. The Passaic Valley Sewerage Commission is pushing forward with the gas-fired power plant just months after New Jersey Gov. Phil Murphy ordered them to pause it to ensure that the project does not violate a soon-to-take-effect environmental justice law designed to protect communities that are already overburdened with sources of pollution. (AP Photo/Wayne Parry, File)

The Supreme Court decision to limit how the Environmental Protection Agency regulates carbon dioxide emissions from power plants could make an already grave situation worse for those affected most by climate change and air pollution, advocates say.

Environmental and climate justice advocates from across the United States are decrying the court’s 6-3 ruling, saying it will be felt most by communities of color and poor communities, which are located near power plants at higher percentages than the national average. They are calling on the EPA to find alternate ways to limit carbon dioxide emissions and other forms of air pollution, and for Congress to grant the agency the authority to do so.

The court did not prohibit the EPA from regulating carbon emissions, in fact Chief Justice John Roberts said capping carbon emissions to move the U.S. away from burning coal for electricity “may be sensible for the crisis of the day.”

Despite this, advocates said the ruling puts disadvantaged communities at risk of greater harm due to the effects of climate change and air pollution. They also are concerned about the ability of the EPA to enforce other bedrock environmental laws, like the Clean Water Act.

The Supreme Court decision “denies relief to Black and other communities of color as well as poor communities disproportionately exposed to power plant pollution and vulnerable to climate change,” Monique Harden, assistant director of law and policy at the Deep South Center for Environmental Justice told the Associated Press.

Harden’s organization has done extensive research on the effects of heavy industry on people living along the Mississippi River Chemical Corridor — also known to some as Cancer Alley — a stretch of petrochemical plants and oil refineries.

Thousands of miles west the Supreme Court decision was just as alarming to Darryl Molina Sarmiento, executive director of Communities for a Better Environment. She said the ruling is part of a decades-long effort by the fossil fuel industry to strip the EPA of its ability to protect vulnerable communities, including those that live alongside power plants.

“Because the entire western grid is connected, a polluting power plant in Southeast L.A. can be supplying power to wealthy white communities in Utah,” she said. The same is true when California imports power from coal-fired power plants in Arizona and the low-income communities of color that surround them there are polluted, she said.

On a press briefing with the Green New Deal Network, a nationwide coalition of environmental organizations, U.S. Rep. Jamaal Bowman expressed concern that the decision could set a precedent that will limit regulatory agencies in their ability to protect human health.

“This ruling could potentially undermine all kinds of regulations that are about saving lives and promoting well-being,” he said.

“We cannot, we must not, and we will not let this court stop us. The Biden administration must declare a climate emergency immediately and use every single power at its disposal.”

Although carbon dioxide is not a health hazard, many other pollutants that are harmful to the respiratory system, like particulate matter and nitrogen oxides, are typically emitted along with them. Recent research has shown that people of color are disproportionately exposed to this type of air pollution.

“It is our responsibility to respond at this time because we cannot allow those who are most vulnerable to pay this price,” said Sen. Ed Markey, who was also on the call. “It’s up to those of us who have been given some power, given some privilege to now stand up, shoulder to shoulder with them, to engage in this fight.”