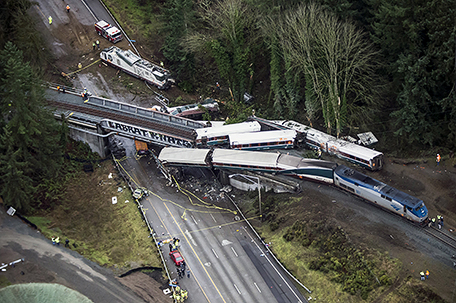 ABOVE PHOTO:  Cars from an Amtrak train that derailed lie spilled onto Interstate 5, Monday, Dec. 18, 2017, in DuPont, Wash. The Amtrak train making the first-ever run along a faster new route hurtled off the overpass Monday near Tacoma and spilled some of its cars onto the highway below, killing several people, authorities said. (Bettina Hansen/The Seattle Times via AP)

By Michael Balsamo and Haven Daley

DUPONT, Wash.  — Federal investigators in the deadly Amtrak wreck want to know whether the engineer was distracted by a second person in his cab as his train hurtled into a curve at more than twice the speed limit.

Three people were killed Monday when the train barreled into a 30 mph zone at 80 mph and plunged off an overpass, sending rail cars plummeting onto a busy interstate highway south of Seattle.

A locomotive from the train was removed Wednesday morning from the scene. The wreck closed the southbound lanes of Interstate 5 south of Tacoma, during the busy holiday travel period. Authorities said they’d reopen the freeway lanes as soon as possible.

A conductor in training was in the locomotive with the engineer at the time, investigators said. A federal official who was not authorized to discuss the matter publicly and spoke on condition of anonymity said authorities want to know whether the engineer lost “situational awareness” — didn’t realize where he was — because of that.

On Tuesday, National Transportation Safety Board member Bella Dinh-Zarr said preliminary information indicated the train’s emergency brake went off automatically and was not manually activated by the engineer. That could mean he did not realize the danger.

The engineer, whose name was not released, was bleeding from the head after the derailment and his eyes were swollen shut, according to radio transmissions from a crew member. The transmissions mentioned a second person in the front of the train who was also hurt.

In some previous wrecks, train operators were found to have been seriously fatigued or distracted by a cellphone or something else.

Investigators in Monday’s accident also confirmed that technology that can automatically slow or stop a speeding train, known as positive train control, was not in use on that stretch of track. Track sensors and other PTC components have been installed, but the system is not expected to be completed until the spring.

Regulators have been pressing railroads for years to install such technology, and some have done so, but the deadline has been extended repeatedly at the industry’s request and is now set for the end of 2018.

Dinh-Zarr said it is too early in the investigation to say whether positive train control would have prevented Monday’s tragedy but noted that a mandate to install the system on tracks nationwide by 2015 had been pushed back by Congress.

Sen. Richard Blumenthal said on Capitol Hill on Tuesday that failing to enforce the new deadline would be a “moral failure.”

“If we do nothing else in this Congress, let us insist that that deadline without additional delay,” the Connecticut Democrat said.

Investigators will talk to the engineer and other crew members and review the data recorders from the lead locomotive and the rear engine. They are also trying to extract data from inward- and outward-facing on-board cameras that were damaged in the crash, Dinh-Zarr said.

The train, with 85 passengers and crew members, was making the inaugural run along a fast, new 15-mile bypass route. Investigators are looking into what training was required of the engineer and other crew members to operate on the new stretch of track, said Ted Turpin, the lead NTSB investigator of the crash.

“Under Amtrak policy he couldn’t run this train without being qualified and running this train previously,” Turpin said of the engineer.

At least some of the crew had been doing runs on the route for two weeks before the crash, including a Friday ride-along for local dignitaries, Dinh-Zarr added.

The conductor training in the cab was familiarizing himself with the new route, which is expected of conductors before they start work on a new itinerary, she said. A second conductor was in the passenger sections of the train at the time.

In an accident with strong similarities, an Amtrak train traveling at twice the 50 mph (80 kph) speed limit ran off the rails along a sharp curve in Philadelphia in 2015, killing eight people. Investigators concluded the engineer was distracted by reports over the radio of another train getting hit by a rock.

On Wednesday, a judge told prosecutors she will review the case and set a hearing for February where prosecutors may have the chance to argue that the engineer should be held criminally accountable for the derailment.

A different judge in September threw out involuntary manslaughter and other charges after finding evidence pointed to an accident.

Amtrak agreed to pay $265 million to settle claims filed by the victims and their families. It has also installed positive train control on all its track between Boston and Washington.