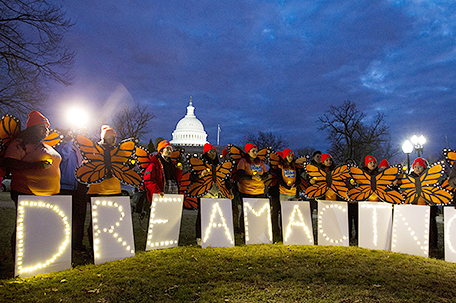 ABOVE PHOTO:  Demonstrators rally in support of Deferred Action for Childhood Arrivals (DACA) outside the Capitol, Sunday, Jan. 21, 2018, in Washington, on the second day of the federal shutdown. Democrats have been seeking a deal to protect the “Dreamers,” who have been shielded against deportation by DACA, which President Donald Trump halted last year. (AP Photo/Jose Luis Magana)

WASHINGTON — Congress sped toward reopening the government Monday, as Senate Democrats dropped their objections to a temporary funding bill in return for assurances from Republicans leaders that they will soon take up immigration and other contentious issues.

Senate Republican leader McConnell’s commitment to quickly tackle the issue of immigrant “Dreamers” was contingent on Democrats providing enough votes now for a stopgap spending measure lasting a little less than three weeks. The measure needed 60 votes, and Democrats provided 33 of the 81 it got. Eighteen senators, including members of both parties, were opposed.

Before the government can reopen the Senate must vote on final passage, the House must approve in turn, and President Donald Trump must sign the measure.

Democrats climbed onboard after two days of negotiations that ended with new reassurances from Senate Majority Leader Mitch McConnell that the Senate would consider immigration proposals in the coming weeks.

Senate Democratic leader Chuck Schumer lent his backing to the agreement during a speech on the chamber’s floor. “Now there is a real pathway to get a bill on the floor and through the Senate,” he said of legislation to halt any deportation efforts aimed at “Dreamers,” who were brought to the country as children and are now here illegally.

Earlier Monday, McConnell raised hopes for a quick end to the shutdown, saying “I hope and intend” to reach agreement soon on immigration and other contentious issues — if the Democrats agreed to the stopgap spending measure lasting a little less than three weeks.

A block of liberal Democrats — some of them 2020 presidential hopefuls — stuck to their opposition. Sens. Elizabeth Warren of Massachusetts, Dianne Feinstein of California, Kirsten Gillibrand of New York and Cory Booker of New Jersey voted no, as did Independent Bernie Sanders of Vermont.

Feinstein said she wasn’t persuaded by McConnell’s assurances and did not know how a proposal to protect the more than 700,000 younger immigrants would fare in the House.

House Speaker Paul Ryan told “Fox and Friends” Monday that if the Senate approved a temporary spending bill to reopen the government through Feb. 8, the House would approve it, too.

The Senate vote came as most government offices cut back drastically or even closed on Monday, as the major effects of the shutdown were first being felt with the beginning of the workweek.

McConnell said he hoped to reach bipartisan solutions on immigration, border security, disaster aid, military funding and more by Feb. 8. If not, he said “it would be my intention to take up legislation” addressing those issues.

The Senate over the weekend inched closer but ultimately fell short of a deal that could have reopened the government before the beginning of the workweek. McConnell and Schumer said negotiations lasted late into the night.

On Sunday night, Democrats appeared to be holding out for a firmer commitment from McConnell. “We have yet to reach an agreement on a path forward,” Schumer said then.

There were hours of behind-the-scenes talks over the weekend between the leaders and rank-and-file lawmakers over how to end the display of legislative dysfunction, which began at midnight Friday after Democrats blocked a temporary spending measure. Democrats have sought to use the spending bill to win concessions, including protections for roughly 700,000 younger immigrants.

Republicans have appeared increasingly confident that Democrats are bearing the brunt of criticism for the shutdown and that they will ultimately buckle. The White House and GOP leaders said they would not negotiate with Democrats on immigration until the government is reopened.

President Trump on Monday accused Democrats of prioritizing services and security for noncitizens over U.S. citizens. “Not good,” his first tweet said. In a second tweet, he said, “Democrats have shut down our government in the interests of their far left base. They don’t want to do it but are powerless!”

Trump’s first tweet appeared to undercut comments by his legislative affairs director, Marc Short, who told CNN that the immigrants in question are law-abiding and “productive to our society.” Short says the administration wants to “find a pathway for them” to stay in the U.S.

It appeared that Democratic resolve was beginning to waver, with growing worries that a prolonged shutdown could prove to be an electoral headache for the party just as it has grown more confident about prospects in November midterm elections.

Although they initially dug in on a demand for an immigration deal, Democrats had shifted to blaming the shutdown on the incompetence of Republicans and Trump, seeming sensitive to being seen by voters as willing to tie up government operations to protect immigrants.

Trump, who regularly disrupted negotiations in recent weeks, had been a relatively subdued player in the weekend debate. He has not appeared in public since Friday afternoon. The White House said he was in regular contact with Republican leaders, but he has not reached out to any Democrats, a White House official said.

Democrats are facing intense pressure from their base to solve the issue over the young immigrants, commonly referred to as “Dreamers,” and they are skeptical of Republicans’ credibility when offering to take up the issue. Whether Trump would back the emerging plan or any later proposal on immigration is an open question.

While lawmakers feuded, signs of the shutdown were evident at national parks and in some federal agencies. Social Security and most other safety-net programs were unaffected by the lapse in federal spending authority. Critical government functions continued, with uniformed service members, health inspectors and law enforcement officers set to work without pay.